This has been an exciting week – full of visitations from my teenage self in the midst of my current grown-up life. On Wednesday, one of my friends with whom I attended both boarding school and college came to visit me at work, with two poised, articulate, artistically inclined daughters in tow. Her younger daughter is looking at colleges, and her older daughter attends one, back on the east coast. But both are creatures after my heart, theatrically scalloped, with strong outside interests in history, english lit, and languages. My friend and her husband have done very well, obviously. They are confident, affectionate with their mom, and excited about their learning paths and lives – sponges about everything that surrounds them. Well done, Holly!

We met on campus in my office, currently without an A/C unit, the previous one having died a loud and horrible death, and we walked together to the center of campus to the Tudor Campus Center, where we had lunch out in what I want to call the piazza, in front of the campus center – I swear that if I were to take more advantage of that space, I would never be stressed out, because a half hour sitting under an umbrella there takes me back to sipping un cappuccio in Campo Santo Stefano in Venice. 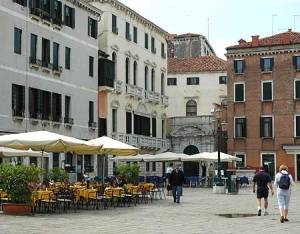 But with Holly and the girls, it was as close to that state of blissful youth as I am likely to encounter at my job site.

But first, a wonderful thing happened, that I promise will eventually tie back into Neil LaBute.

I was chatting with one of my professorial colleagues, there in the hopefully temporary swelter of my upstairs office, when she turned her head and began beaming at the airspace outside my door. I could hear the steps of several people coming up, and sure enough, it was Holly and her girls coming up the stairs. Introductions were made and then we left my colleague there and went to our lunch.

Later, after having left Holly and the girls to take a tour of the program, I came back, and my colleague said to me – “Your friend is lovely. She walked up those stairs beaming at me even though she didn’t know me from Adam and it would have been a great example for one of my students to see about how to be in the world.” People really do like to see a pleasant person coming toward them. Opportunities will open for someone who brings light with them into the room.

You know that, right? Another of my colleagues (I work with amazing people) once put the converse principle even more succinctly. “You don’t want to be one of those people who people see coming toward them and they duck away from or try to avoid them.” And no, I don’t. So it was especially nice to have Mary Joan see that Holly is such a light bearer. As she herself is. Maybe most of us tend to gravitate toward those types of people.

Later that evening, as I sat and watched four distinctly not-light-bearing characters on stage in “reasons to be pretty” at the Geffen Playhouse, I struggled to embrace the play. After all, I like to be challenged when I go to the theatre, right? I thought it was extremely well-acted. The setting was beautifully realized by Takeshi Kata, another of my colleagues at USC. I don’t want to ruin anyone’s enjoyment of the show by talking too much about it – suffice it to say that Tak accomplished a lot with what was ostensibly quite simple at the beginning of the show. Endlessly unfolding into new scenes, each more expertly arrived at than the last. The lighting was lovely, the sound terrific, the costumes perfect. The direction was bold, as was required by the script. These were no shrinking violets on stage. They were each frankly, terrifying in two or three distinctly fascinating ways.

But I didn’t like any of them. And my take away was that the reasons to be pretty are that if you aren’t, things can go pretty badly for you. And it is possible to say nice things to the people around us and god knows we should because time moves apace and you can lose everything if you don’t. And it isn’t the outside, transient things that matter, but how we treat each other as we pass through this world.

I’m sorry, Neil LaBute – I think, just on the basis of seeing several of your plays, that you have had a life filled with very dark-souled people. You are an artist – a powerful one at that. Please forgive me if I have difficulty living within your dramatic world. There is so much darkness in the world that if I have a choice, and I think I do, to minimize the darkness in my life to the extent that I am able, I will choose light-bearing over not. I guess probably that’s exactly what I am supposed to take away.