There has been a crime against Christmas and it took place in my lobby under cover of darkness, or, even more likely, in the stark light of day.

Last week, when the installation of the Christmas decorations happened, I was bemused to see that  they included two lovely deer at the base of the tree.
This was a new, bucolic and heart-warming addition to the usual array which typically included a pretty tacky tree with large packages wrapped underneath. I felt transported to the Connecticut countryside; if I squinted my eyes real right, I could imagine the grouping on a white hillock just outside my breakfast nook. 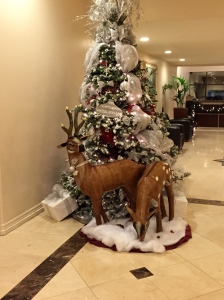 An art history major and long time appreciator of art-at-arms’-length in galleries and of the sanctity of theatrical sets and props, I resisted my deepest desire to reach out and touch the little dearies to see if they were inflatables or carved in wood, which their texture indicated.

I took copious photographs of the two parental cervidae and noted that the juvenile was cruelly separated from his/her parents by the width of our cool white marbled lobby. 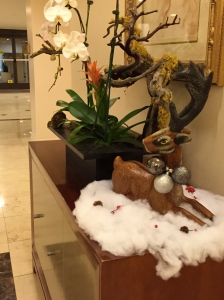 He rested atop his white nest of cotton batting looking longingly across the room at his parents who grazed beneath the white flocked tree.

I insisted, much to the delight of our main security guard, Officer Danny, who keeps us safe from marauding deer-snatchers during the days, that the family be reunified. And so, one of the custodians and I executed a family reunification effort, he placing the baby at the feet of its parents, I cooing my approval from the side and snapping another photo. 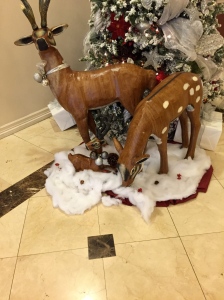 When I had first seen the display in the lobby, I had sent a photo to our son Chris via a text  message, with the caption, “a little holiday cheer” or some such inanity. His response, a typically wry one which would likely have made David Sedaris even laugh, was “take a picture of Dad riding one.”

I replied, “To what end?” Followed by a nasty epithet which I shudder to repeat but will anyway – “You Instagram Whore!”

Whatever possessed him to request that his distinguished and 88-year-old actor father mount one of these cervine critters was pure folly. Besides, it was still not established whether these were inflatables or wooden. Either way, it would endanger both parties, the deer and my adorable husband. So I did the next best thing which was to ask him to climb into the display and stand next to the deer. Which he did. Evidence will show that the reunification project happened after this photo was taken. I know my gentle readers will forgive this lapse in chronology. Furthermore, that I posted the photo on Instagram, just so I could beat Chris. 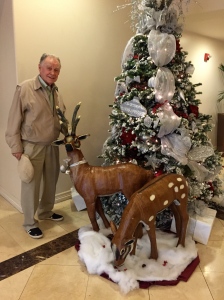 This morning, I went to the mail slot in the lobby to mail a recent payment to my eye doctor and as I turned from the slot and started toward the rear exit of the building, I ground to a halt, in horror. The deer were gone! In their place, nothing but the cool shiny marble of the lobby floor.

“Where are the deer!!!!” I cried out across the lobby to Officer Danny. Another homeowner, who stood next to the guard desk turned and with a dismayed expression on her face said, “Yeah, there were deer there! Where did they go?”

With a sheepish shrug, Danny said quietly, “Some people had issues with the deer.” Both the OHO (other Home Owner) and I looked to him and said, “What issues?”

Officer Danny, ever the soul of discretion, would not be caught dead gossiping with anyone about anyone else’s business. I  really couldn’t imagine exactly what issues you could have about the lovely little deer in the lobby. At that moment.  But with some more thought, here are some of my best guesses.

Perhaps someone’s dog tried to eat them? Urinate on them? Hump them? Though the size of the dogs in our building range from tiny to tinier, I can’t imagine that even being physically possible. Whatever happened, the incident caused the owner too much pain and embarrassment and the offending deer were asked to leave.

Perhaps the same thing happened with someone’s children? Well, only the first two options of above.

Perhaps someone objected to the use of inflatables as unsustainable and tacky? Damn it, now I’m kicking myself that I didn’t touch them to find out what they were made of.

Perhaps someone objected to the use of wood for such a ridiculous display? Surely, there are more acceptable uses for wood than these? I can see him sputtering mad, leaning over the console desk to demand their removal from the lobby. And Danny trying to keep a straight face and succeeding.

Perhaps the vendor who supplied the deer told our building’s manager that they would each cost $200.00 a week to rent. “Okay, we’ll throw in the baby for an extra $75. Total is $475 a week….times 5 weeks equals just $2,375. Imagine how much cheerier this display is with these little creatures.” I can see the vendor with her clipboard, her calculator, coming up with a “reasonable rental figure” for the now incredulous building manager. As a production manager, faced with renting Seagulls for our upcoming production of The Seagull, I can understand a figure like that stopping the discussion. Dead in it’s little hooved tracks.

Or maybe, just maybe, under the guise of night, with the magical season upon us, the little family just got up out of their cozy corner and wandered out the back door of the building, and down the street, the bright streetlights shining off their wooden/inflatable backs. Leaving us all to wonder where they could have gone. 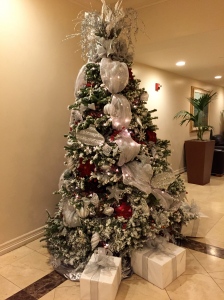