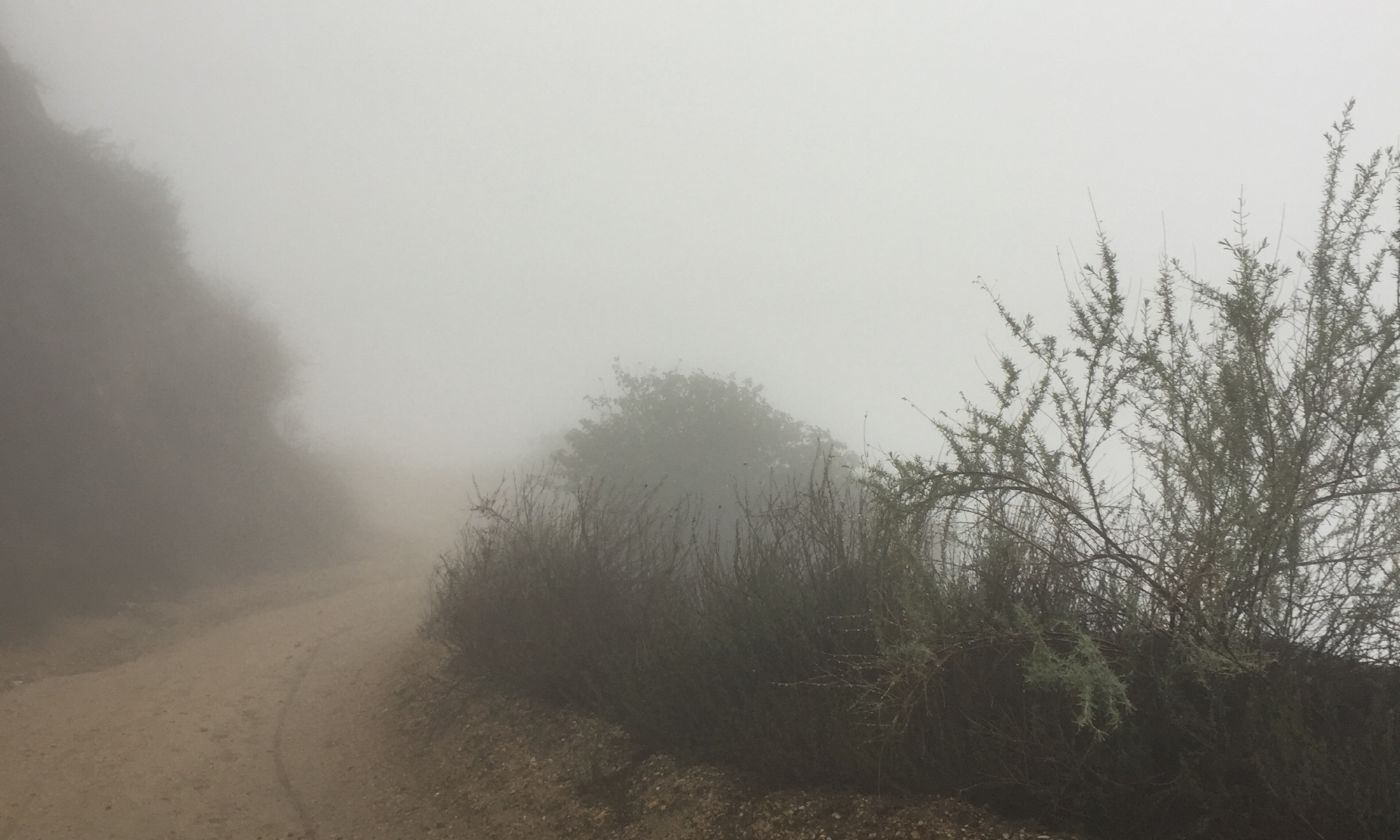 This morning at the crack of dawn, I woke and pulled on my pants and boots, grabbed some breakfast setting off to meet two old stage manager friends (okay, old as in I’ve known you a long time, not actually old. Geez, people are so sensitive) to go on a hike.

I love hiking, though you’d never know it from practice – I think today’s hike is the first one I’ve taken since the summer when we stayed up in Tahoe, and hiked from the parking lot to the beach one day. Living in California and in Los Angeles where there are an abundance of hiking trails doesn’t seem to have been sufficient to get me outside, but a simple question posed by a fellow stage manager on facebook actually got me out the door.

Anyone wanna go on a hike?

You’d think three stage managers could organize a hike through deft email execution-an email or two, right? Our arrangements were hilarious, taking about a week and 16 emails, and an actual live phone call to realize. As I pulled up outside Susie’s house at 7:40AM, I replayed the email exchanges in my head, laughing that the three choices of hikes did not include the very real possibility of rain, and as I stepped out of the car, greeted by Susie on the stone steps to her house, I proposed hike #4 to IHOP. Fortunately, she didn’t go for it.

We swung by to pick up Michele and off we went to our hiking destination, which I think was Eaton Canyon, though I can’t swear to it because I’m not apparently from this region, having lived in LA only thirty-three years. There was a heavy mist on the windshield, but I didn’t pay much attention because it was great to see good friends and colleagues from so many years and there was a lot to catch up on.

Professionally, we’ve all worked together on so many shows that I can’t really remember which ones they were, but I always credit Michele with training me to be a truly autonomous ASM. She was the PSM on one of the CTG Celebratory shows – perhaps the 20th Anniversary, when as ASM, one of my jobs was to cue Gordon Davidson onstage riding an elephant. It was early in my career, one of my first ASM assignments at the Taper, pre-renovation, where the elephant (and all scenery for that matter) had to come in through bedroom-sized doors SL. I was intimidated and also admired Michele for her years of experience as one of the top SMs at the Taper. Deferring to her, I asked her what she wanted me to do next.

And so I did, learning that I was there because she trusted me to know what to do next, otherwise I wouldn’t have been there.

I’ve been admiring Susie’s penchant for strenuous hiking for several years now. I’ve wondered how she’s able to put in the miles she does with her work schedule. Kind of amazing. I was glad to be there this morning. We started down the fire road into beautiful Eaton Canyon. At least I assume it is beautiful, because the conditions were quite misty and we couldn’t see too far down the road, kind of the perfect metaphor on this eve of a New Year fraught with political uncertainty.

This was the selfie I took of the three of us, looking fresh as we started off, me sporting my GumCha, a Christmas present from my Dad and his wife; this scarf is typical of those woven by rural farming families in West Bengal, India for more than 2,000 years. The 4o year old GumCha4Health project was started by local health and development professionals to

It’s pretty and bright, and apparently gets softer every time you wash it. I’ve worn mine almost every day since Christmas and it’s in the wash for the first time as I write this.

So, what do veteran stage managers talk about on the trail for 2 hours? Taping out floors and how sore it makes us when we’re done? Yes, a little of that, but much more about our lives outside the rehearsal room. The three of us share life synchronicity which they might not appreciate my sharing with you, but which gave us plenty of good conversation over the next 5.6 miles. The first 2.8 were mostly up the hill, where we were passed by bicyclists, runners, dog walkers, and other folks out and about to ring in the New Year with a good cardio workout.

We stopped periodically to huff and puff, and per Susie’s usual routine, we greeted every single person at least once, and some of them twice, the cyclists, as they lapped us up the hill and back down. This paid off at the top, when we were able to ask someone to shoot the picture of the three of us by the Henninger Flats sign.The second 2.8 miles were down hill, in the pouring rain. I was grateful to have my GumCha with me to wipe off my glasses. The lovely tree portraits below were taken by Susie.

“Els, can you stop squirming?”

By the time we got back to the car, we were able to wring water out of our clothes. We raced home to take showers or hot baths, and for a good nap before tonight’s festivities.

What will the New Year and the road ahead bring? Hard to say, hard to see even, but in spite of the rain and mist, we will still get there with persistence, civility, and good hiking shoes.

The honeymoon’s over. After launching the book, creating the book’s FB page and asking everyone to review the book, we received the first royalties statement and practically had kittens. Seventy-three books had been sold, but no royalties were actually accrued.  Zero, zip, nada. I logged into our createspace account and then contacted them to talk with a human being, something I should have done earlier in the process. These were the disheartening reasons why there were no royalties accrued:

So, what can we do about this?

At a time when we should’ve been elated about publishing the book in time for Christmas, this news was not cheering. Ironically, the book seems to be selling pretty well, and to be frank, we didn’t publish it to make a fortune.

Publishing is complex and tough to make sense of as a newcomer. My advice, always read the fine print.

In the meantime, special thanks to those of you who have taken the time to write reviews on Amazon! It means the world to us! Merry Christmas to all.

In September we began the march toward publishing Jimmie’s book; I was obsessed with publishing by Jimmie’s 90th birthday. I explored several different self-publication routes, and discovered that several other publishers might help us, but not until mid-February. Click. Sorry. We have a goal, people!

And so, as we sent off the book to Createspace.com, it was a nail biter as to whether we’d make the December 1 date. I took Jimmie out for his birthday dinner on December 1st at a local Italian restaurant and during dinner looked on my phone to see if the book was for sale yet on Amazon.com. Sure enough, sometime between the salad course and the entrée, right on December 1st, the book went live. It was a pretty special moment for both of us. For Jimmie, who’d been working on this book for twenty plus  years. For me, who had embarked upon the autodidact’s path, learn editing, indexing, etc., and for us, as the shared pleasure of creating the physical object that was now winging its way toward us in a box of 25 copies. Now for the celebration.

Planning a landmark birthday for a 90-year-old is stressful.  The stakes are high. I asked Jimmie whether he thought he’d have made it to his 90th birthday when he was younger. He told me he’d always thought he would die young, which kind of broke my heart and I was glad I hadn’t known that before. For Jimmie, eighty was a landmark birthday, that, and outliving Richard Nixon. When Tricky Dicky passed, I remember getting panicky, and telling Jimmie he needed to set a new goal and quick. We are currently in negotiations to set another one – 110 sounds pretty good to me.

Party planning for the 90th is one of the more stressful things I’ve had to do socially since Jimmie and I planned our wedding thirty plus years ago. I know I owe apologies to those who felt left out off the invitation list. 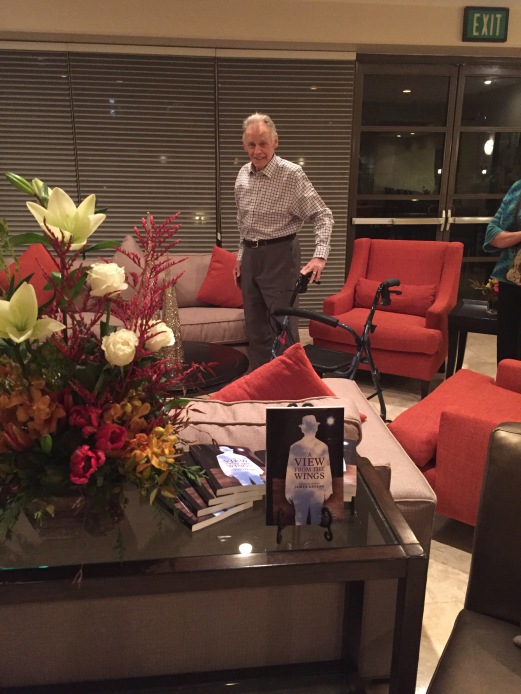 The venue held fifty people, and our budget held fewer than that. I turned to my colleague Marissa for consulting. She steered us toward City Fare Catering, which was a great decision. I highly recommend them, as Fabio was able to stay within our budget and provide delicious food in a beautiful setting. Flowers were by Della Robbia.

I learned a ton about event planning in the process as well. With the right vendors, you can do it!

At 6:15 or so, the guests started to arrive, trickling into the room with anticipation, the usual nerves.

Who will I know here? Will there be anyone to talk to?

Watching old friends greeting old friends, and old friends meeting new friends was such a treat. The tapestry of one’s long life in the theatre so rich and so many of the folks in the room both Jimmie and I have worked with on many separate projects. Many have been friends for 30-50 years. Collectively, there were some heavy hitters in the room, notably Hal Holbrook, who’s foreword kicks off the book; Charlotte Rae and Alan Mandell, with whom Jimmie had acted in Endgame last May at the Kirk Douglas Theatre. We had some family there, our nieces Elizabeth and Martha.  It was a very special night. 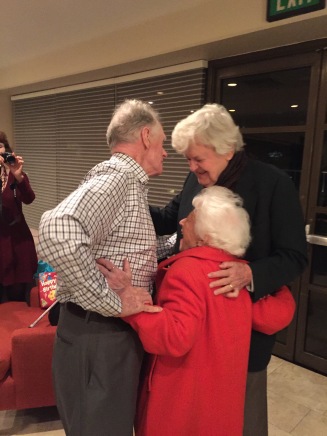 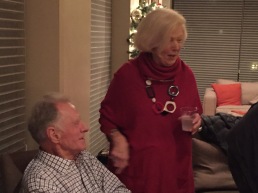 After dinner, Jimmie read two excerpts from the book to the appreciative group; I tried to video tape them but my phone abruptly informed me it was full. Fortunately throughout the evening, one of our guests, Stella, was taking pictures and video taped the reading.

Afterwards, several people encouraged us to record  Jimmie reading the book, which we plan to do soon. Aha! The next goal! And then, it was time for cake. The most beautiful cake I’ve had the privilege of eating. Graced with the cover of A View from the Wings, a cover designed by Bob Stern, one of my dearest friends from college, the cake emerged from the kitchen for Jimmie to extinguish it’s representative candles.

As the party guests trickled back out into the chilly December night, we retired to our condo with niece Martha, and our intrepid photographer, Stella, where we sat and dissected the evening while Stella “gave her auntie a foot rub.” Life is pretty special sometimes, especially a life in the theatre.

A View from the Wings is available on Amazon.com and is, for the moment, the #1 New Release in Theatre Biographies. We welcome your purchase of the book, as well as your reviews on Amazon!

In answer to your question, no the lady clown didn’t come along. Though her hiking boots were extraordinary. :)