So much time has passed. I am moved into my new apartment, in Campo Santo Stephano. 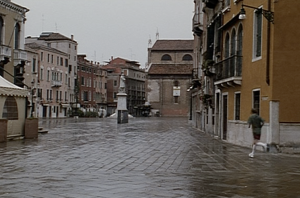 Bob is here, and we are having a very active and undirected summer.

Our biggest social event of the past two weeks was the Festa del Redentore, to which we were escorted by the gang from Paradiso Perduto, cook Maurizio, waitress Francesca, and we went in their huge boat/barge into the basina to watch the fireworks shot off above S. Marco – it was fabulous – the boat all decked out with ivy and a pergola with paper lanters which were lit and spent as desired. The fireworks were masterful –never had I seen such diversity and elegance in fireworks – one would wish that the MX missile could be replaced by such a race – could you imagine an arms race of fireworks – who could create the most beautiful light! 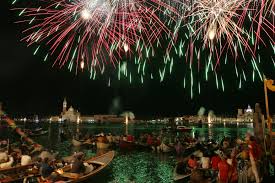 Then off to the Lido where there was dancing until dawn. Fell asleep on the beach with Pierre Giorgio, a friend from NE of Venice. Sandy McCaw was down and so we had a great time.

(Get Bob to help fill in the details of this night – really wild chases of Sandy by this Venetian who wanted her madly. We ran giggling all over town to escape his advances.

The Feste della Madonna della Salute is preceded by the construction of an enormous temporary bridge over the grand canal from near San Marco to the Salute). It was quite a feat of engineering, the legs of the bridge resting on barges in the Grand Canal. 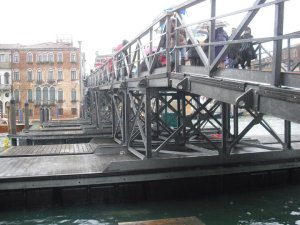 Just returned from a week in Switzerland at the International video Festival, an incredible experience. We stayed in barracks-type accommodations (all paid) in a Hotel that resembles one of the war summer retreats for wives and kids – fold down 50’s ashtrays in the bathrooms, etc. It was a fascinating festival – merging in a conference of video art (concorso between seven or eight European countries, USA, Canada), a presentation of recent advances in computer manipulated graphics; and all that’s new in the world of video pinball and video discs from Atari. Our NYU group, led by Angela Churchill, Philip Rylands and Dottessa Marangoni,  was busy trying to put together a video tape to present to the conference, which we did, but we were so busy we missed much of the conference and concourso. 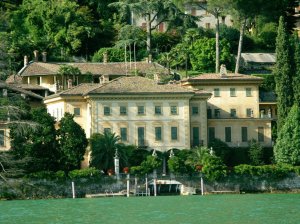 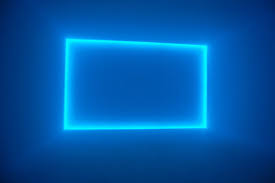 and Sol Lewitt penciled walls in many of the corridors and main salas, an incredible installation by Mary Nordman, who has created a black box with optical effects and the most exaggerated echo effects I’ve ever heard – I stayed in there for close to ½ hour, singing and playing with sound – others who were equally in tune with my excitement shared the experience with me – really a mind-blower. The whole week was one of the most significant for me since I’ve arrived in Europe. Video really turned me on – that it could be accessible to me too, was very exciting.

Saw Pierre Giorgio before he went on vacation in the Pyrenees. He’s a very sweet man – a bit like a bear, but very gentle. Architect from Cividale, north of Trieste, almost on the Yugoslavian border – I look forward to seeing him in late August and September through December. Enough for now – a quite quiet evening at home. Began working at the Guggenheim today – saw too many people without real contact – tomorrow must throw myself in a little more. X0x0

(This is the last entry in this journal. I returned to the US in late September of 1983).