This morning we had a late scheduled brunch at 10:30, so I allowed myself to sleep in past the yoga session with Nikki, and awoke to the fog which surrounded us as we steamed toward our destination, through Frederick Sound to the sheltered cove in the  inlet where we spent the morning relaxing.

We spent a quiet day on the boat this morning. This afternoon there were more options available.

I  planned to go kayaking again this afternoon. Dad and Sally, Larry and Barbara were going on the small boat tour of the inlet, and without my usual kayaking p

artner, I planned to just show up and get paired with someone.

I ended up getting paired with Jesse, from Washington, D.C. He and his wife Valerie are on the cruise to celebrate their 25th wedding anniversary, and Valerie had opted to paddle with Karen, from Brisbane, Australia, with whom she had paddled earlier in the week.

I was a bit intimidated to paddle with Jesse, who is a really skillful kayaker, but I was counting on my years of rowing crew to hold me in good stead.

The day was the most beautiful of all so far. We paddled out and again, I had no camera to capture the most astonishing waterfall of all, so here’s a picture provided by the Un-Cruise folks of my brother Larry and his wife Barbara in their small boat by the waterfall.

The water was a bit choppy due to the wind, but it was at our backs on the way out, and we paddled close to the shore on the way back to avoid the wind. Our guide, Megan showed us her “favorite place in the world,” these spectacular falls.

When we returned to the ship, we were just in time for the Polar Plunge. The timing of our landing at the dock was propitious for my avoiding participating in the plunge itself.  Jesse and I just made it into the easy dock before the first plungers appeared on the dock. My excuse was that I couldn’t make it up to change because of the spectators on the stairs…..

There were a lot of large  (12″-15″) white jellyfish visible in the water, and it wasn’t until I heard Jackie Hedgepeth’s lecture later that night that I learned that they didn’t really have the ability to propel themselves purposefully through the water, so as we watched from the rail of the 200 deck, I worried a bit not just for the plungers’ hypothermia, but also for their exposure to these monsters.

With thanks for photos taken by Ken O’Brien of the Un-Cruise crew.

The back deck of the ship was filled with spectators, all with cameras and all cheering the participants on enthusiastically. It was great fun.

After the plungers were finished, (and some of them, unbelievably, went two or three times into the water) came the race of the day.

During the cruise, we had watched a good natured rivalry develop between Claudia, “the evil American lawyer”, who hailed from Denver, Colorado, and Brian, the Aussie Doctor. Brian had wagered days before that Claudia would fall off her paddle board. If she did, he bet that she would have to write a poetic paean to Brian. If she did not fall from her board, Brian would have to do the same for her.

The night before, we had listened, at dinner, as Brian delivered his good natured ribbing poem about Claudia.  Claudia provided a spirited rejoinder to Brian, and their rapt audience (us) awaited further games.

Today’s was the paddle board race around the Safari Endeavor. And they were off, Claudia quickly pulling into the lead. The spectators cheered, led by the spirited Vivien, who had prepared for the event earlier in the day.

I’d seen her working with some green painters tape and some paper, and had asked her at the time what she was making.
“You’ll see!” She said with a twinkle in her eye.

Claudia’s lead did not hold, unfortunately, and Brian won by about 4 paddle board lengths. Ever gracious, Brian did a mock fall from his board at the finish line. Back into the polar water…… 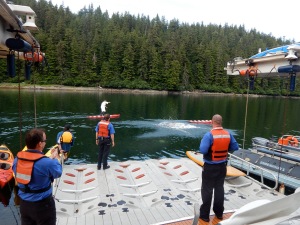 All in all, a spirited day in Thomas Bay.