To my darling Jimmie Greene on our 30th Wedding Anniversary – September 1, 2014.

1) Meeting at the McCarter Theatre because you had the coolest dog on the planet and I was delivering balloons to your dressing room from an admirer and interrupted you as you were working on your crossword puzzle…in pen? What a turn on: a dog lover, someone who was loved 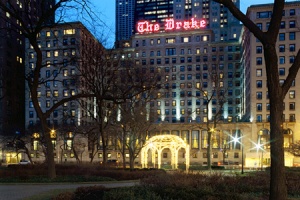 by someone enough to send balloons, and smart, to boot.

3) How you looked like a lamb being led to slaughter at our wedding rehearsal? You were so nervous. Come to think of it, so was I.

4) Hiring a limousine on the day of our wedding to go from our apartment on 70th  St. to the church on 71st St. and then to the restaurant on 72nd St. When we got to the church there was a dumpster blocking the street so I had to get out in my wedding dress and walk to the church. We hailed a cab after the wedding reception on 72nd. Quickest cab hail in the history of the world. 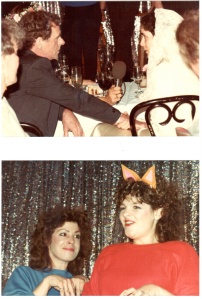 5) Running together in Central Park as the snow fell and it was so silent. Running around the reservoir and looking at the skyline on Central Park South.

6) Acting together the one and only time In Hartford, CT in Desire Under the Elms.

7) Driving cross country in my grandmother’s Bonneville with Jasper and staying in some real fleabag hotels like in Elko, Nevada and Els getting a speeding ticket outside the Grand Canyon. Where did that guy come from?

8) I was working on an MFA student’s thesis film as the costume designer and needed an ironing board from home which you drove over from the valley without complaint. You have always been there for me.

9) The day we went Christmas shopping in separate cars and ended up on the 405 right behind each other at rush hour?

10) When you were in The Iceman Cometh and I walked over nightly from the Magic Hotel with Jasper to pick you up after the show? And didn’t worry about my safety. Times have changed in Hollywood!

11) Dinner at Butterfield’s, a restaurant clinging to the cliff on Sunset to celebrate your being cast in The Days and Nights of Molly Dodd and having no idea what that would mean for you or for us but being amazingly happy.

12) Buying our first house and fixing it up. Removing the weird sand corrals in the back yard with old Jack, who was hired by Scott  (at a bar) to  break up the concrete with a sledgehammer?

13) Going to North Hollywood park and signing up for the adoption orientation offered by the Department of Children’s Services.

14) The day we finalized the adoption? 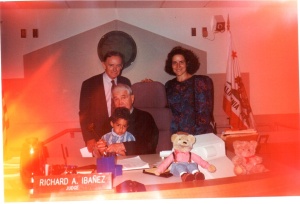 15) Taking turns lacing up Chris’ ice skates in the trailer near the hockey rink in Van Nuys?

16) Our four trips to Hawaii? The first one, when we arrived in Waikiki at the hotel where the entire hotel was under construction?

The third summer in Montana.

17) Four summers in Whitefish, Montana? Especially the first one when we drove up with Lizzie and she was so frightened by the thunder storms that she  tried to chew her way out of the cabin through the wall next to the door? Lying in bed and listening to the thunder storm rage overhead and how from then on every time we brought out a flash camera, Lizzie began to tremble?

18) Our five trips to Chatham?

19) You and Chris and me bicycling to Beeman Park from Ranchito Avenue?

20) All those opening nights we attended together, with the knowledge that after the opening we would have some time together during the days.

21) Logging the hours in the car during the hockey years.

22) Fried clams at the Lobster claw in Orleans, MA.

23) Tea at the Huntington Gardens.

24) Leaving your home in Van Nuys to go on your 12 Angry Men tour and returning  to your new home in Downtown LA?

26) Attending Peter Harvey’s art show in LA and buying the painting, the only one that didn’t involve orgiastic cocks at play.

27) The 1994 Northridge Earthquake on my birthday? I couldn’t believe you went back to bed, leaving Chris and me in the den. I think I made popcorn on the stove that morning, a ridiculously dangerous choice, but I wanted to use my new popcorn popper, just one of a thousand thoughtful gifts from you in our 30 years together.

28) Our trip to Fenway Park last summer where you returned after 50 years away and I was so moved about your first glimpse of the inside of the park?

29) When we decided to create a hummingbird garden on our patio downtown and we sat out there for two days amortizing the cost of the patio furniture against the number of birds visiting? When each bird cost $60.00. And now the birds are paying us to visit?

30)Waking up this morning next to the man who makes me feel incredibly luck every day. I may not look as sassy as I once did, but it’s been a hell of a ride. I love you, Jimmie.