This morning, I woke to find that I’d missed a call from Chris.  It came in at 8:00AM, at a time when under any normal conditions on a Saturday in the fall, I would have been up, and well on my way to work.  I called him back, but the phone rang through to his non-message. The fact that young people with smart phones eschew the voice mail message option on their phones shouldn’t surprise me – after all, they don’t use their phones to talk  much. This much I know from first hand experience.

But when the phone rang about 2 hours later, Chris was panting. “You will never guess what happened!”

There are a lot of things that go through my head when my son begins a phone conversation this way; sadly, about 95% of them are not good. Here’s what ran through my head in the 2 seconds before he spilled his real news:

1. I just ran my car off the road into a ditch because a black bear crossed the path of the vehicle with no warning.  I am trapped inside the car and he’s getting pretty mad out there and just pawed the side view mirror off the car.

2. We can see the flames from the apartment of the fire burning near Lake Tahoe. We are being evacuated now.

3. I was running in the woods and got bitten by a rattler. Just a little nip. I’m waiting for the paramedics to arrive and thought I’d give you a call.

4. I dropped my phone into the water at the beach. No, Els, he’s calling me on said phone.

5.  I was just standing there in the bar when a fight broke out and someone smashed a stool over my head and I’m in the ER getting stitches. Good news, Mom,  no concussion, but the police are coming to take me into custody.

But now he’s talking again and he’s very happy sounding, so all of those possibilities dissolve as I hear him say, “I just finished playing hockey and was on my way out of the rink when the owner of the rink approached me to ask me where I’d played. He said they have just hired a new GM and  there might be things for me to do there.”

This is really good news. The resurrection of hockey in Chris’ life as an adult signals nothing but good news. Chris played hockey from age 5 to age 18.  I took him to the ice rink in Van Nuys for a diversion one afternoon, and he peered over the high wall of the rink to watch about ten 5-year-olds in full hockey regalia fling themselves onto their bellies and then scramble back up on their skates and resume skating. Turning his shining eyes up to me, he said, “Mom, I want to do that!”

And I, having been schooled in New England with a staunch appreciation for Ice Hockey, marched right into that crappy little pro shop and asked them for information about their hockey program;  within the week, Chris wore his mini mite uniform and was out there flinging himself down on the ice with abandon. 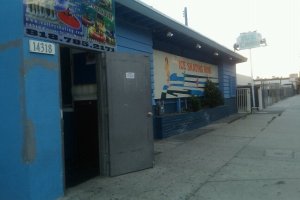 Iceland at that time, was pretty low-rent. It consisted of just the rink and about 300 square feet of pro shop, with a small enclosed café area with windows facing out on the ice. There, parents would cup their hands around the steaming styrofoam cups of bad cocoa, glancing up to watch the drills of the little mites skaters. And we would chat as we watched the Zamboni clear the expansive ice. We learned the progression of our skaters – Mini Mite, Mite, Squirt, Peewee, Bantam, Midget, Junior, etc. 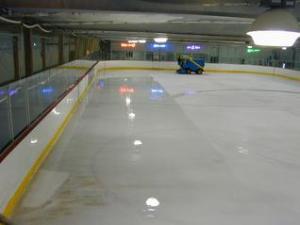 And so began our family’s love affair with hockey. We got there  at 5:00 AM, carrying our sons’ hockey bags and lacing up their skates in the metal shipping container locker rooms adjacent to the ice rink.  The chilled morning air was filled with the squeals and giggles and wadded up tape balls whizzing by our heads as we knelt at the feet of our little princes, wrestling their tiny feet into the even tinier skates.  My husband and I took turns getting up early to ferry Chris to his practices. Later, we attended all the games, cheering from the sidelines, bundled up in our scarves and gloves. They were adorable. We were completely invested in the vision of our sons growing up and becoming LA Kings players. Along the way, they were learning about hustle, and the need to hone their skills, teamwork, and a little bit of Russian.

The Iceland coaches were all Russian.  I can barely remember their names, now, but I remember the drive and the skills building that they instilled in Chris. How Slava would smack them on their thick pants with his hockey stick to get them to go faster, harder, straighter.

Jimmie told Chris in those early days that to be a hockey player, he would need to learn how to skate backwards. Chris then dedicated himself to learning just that and so many more things.Their coaches championed them from level to level, later providing personal instruction in private lessons, an added cost, but with unquestionable effect on their growth. 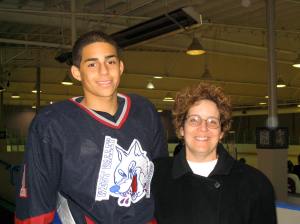 All those years of hockey which had seemed lost in the mists of the past came flooding back, and I followed Chris’ vision in my mind, seeing him out there on the ice with those five-year-old Mini-Mites, or perhaps the Pee Wees. Bursting with pride today for my son, the future hockey coach. 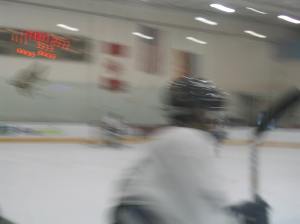 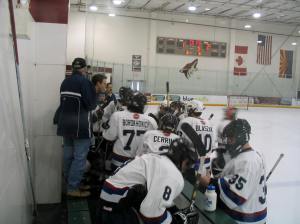