Mother’s Day this year is especially meaningful to me.

My own mother, gone since 1997 to the inevitable lung cancer derived from her life long chumminess with cigarettes, was otherwise my role model. She modeled intelligence, humility, strength, an appreciation for wit and silliness, a reporter’s eye, a strong fashion sense and the ability to cry when things got tough. Divorced in her early forties, she buckled down and got her degree in journalism at Columbia, moved back to her native Pennsylvania, and worked for the next twenty years as a reporter for two different newspapers in the Bethlehem area. I was fiercely proud of her.

When I was a junior in college, she was at Columbia for the year, and when I graduated from college, and headed to Europe for the next year, she visited me in Venice on Christmas day. I lugged her heavy red Samsonite suitcase up and down over the little bridges from the train station to the Vaporetto, and from the Vaporetto stop to my apartment in Venice. We had a marvelous visit. She was enthralled with my life there. There is nothing quite like being “seen” by your parent; your life witnessed, your adultness legitimized.

When I met the love of my life, who was so much older than I, she didn’t judge us, but came to his theatrical openings and visited us in first,  New York, then Los Angeles,  partaking in our lives with the same avidity she had embraced that special trip to Venice.

Then we adopted Chris, at age 2 and 2 months. Shortly afterwards, on the occasion of the funeral of one of my college friends, we flew to Bethlehem to visit Nana Shirley, and her two barn kittens, also newly adopted. I remember crawling around the living room floor, in bright yellow sweatpants, with Chris beaming and chasing the kitties around Mom’s condo. His first Christmas, she sent him a rocking horse kit, which my husband and I assembled in the hours between bedtime on Christmas eve and dawn’s break, because we knew that Chris would find it if we assembled it too far ahead of time. He loved that rocking horse, and played with it until he was nearly 5, when his over-eager rocking threatened to cause it to fall to pieces. Only a few years ago, I gave the horse to one of my colleagues at school, for her son to enjoy.

Periodic visits to California or to Cape Cod in the summer allowed us all to see each other – not enough, mind you, but enough to know how each other was doing. We wrote weekly letters back and forth, filled with news from my end, and hers with a check for $100. each month. As the years went by, the need for the money diminished, but she kept sending the money until Jimmie landed his first TV pilot, and I made her stop sending it.

When she succumbed to the cancer at age 65, her loss was a devastation worse than anything I had been through before. No matter how close or distant your relationship with your mom, there are always things you will wish you had said, or done. As I said countless times to my therapist in the years following her death: “nothing can prepare you for losing your mother.” It’s not something we talk enough about in our society. Being motherless is a club you never dream you will have to join, no matter how illogical that seems.

Being a mother has been one of the most profoundly satisfying things I have ever done. From the day I first met our adopted son, to today, our 23rd Mother’s Day together, it has been a raucous, roller-coaster ride of experiences, each bringing us closer. 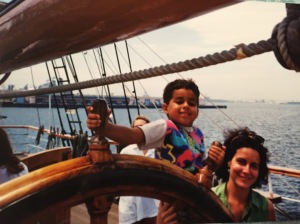 Even the early teen years, where he’d have readily traded me in for just about anyone else’s Mother, further cemented our relationship.

About a month ago, Chris located his birth mother after many years of trying. He doesn’t want me to write about it, so I won’t, beyond saying that today was the first mother’s day that he got to celebrate with two mothers. We weren’t all together, mind you, but I know that he called both of us to wish us Happy Mother’s Day. I am thrilled for him, to be separated from the Motherless Club by two layers of maternal protection. As a Mom, you want to provide the most protection for your child that you can, so I embrace his sudden plethora of mothers. Happy Mother’s Day, to our dear son, Chris.