Saturday morning, Chris’s friend and boss, Michael and his wife Stephanie asked us to breakfast with Chris at their house. We gratefully accepted, appreciating all that Michael has done to support Chris’ growth as a hockey coach. We were also grateful to have some alone time with Chris – the week had gotten increasingly busier, as more and more friends and family came into town, and our face time with Chris and Whitney was diminishing daily.

After breakfast, Chris went and picked up Skylar and brought her to us to watch while they dressed and went to take some wedding photos.  We managed to amuse each other for a few hours when Nana got goofy with the dog guitar. Then Skylar napped for a few minutes. Those were my main instructions from Chris.

It was during this shared siesta that I slipped out from under S’s head, and into my dress and then woke Jimmie and told him he had to get dressed, too. Then we packed up the Ford Expedition AKA “The Tank”  for the wedding trip up the mountain.

With Skylar on my hip, and Jimmie holding onto my arm, we made our way out of the condo and into the Tank. Air conditioning blasting, we climbed the hill to the tram. Once there, we found many helpful hands to carry the flowers to the tram. Up the mountain we went, full of anticipation and excitement. Chris’ hockey videographers and the two wedding photographers, Amy and Heidi,  rode up in the tram with us.

The ceremony was beautiful. Jimmie watched from the balcony above. We processed, Chris and I, dropping me off in the front row, as he continued to the front. Next came Justin and Sammy, taking their places to the right and left of the officiate, David Coburn. Next came the adorable flower girls. In an emotional coda, one of the flower girls was the daughter of Jimmie’s niece, Jen, who had at age ten, been the flower girl at our wedding. The two girls got to the end of the aisle and then remembered their task, flinging the petals with abandon. It was charming. Next came Kai, bearer of the two rings, which he gave to Sammy and Justin after a discreet cue from Sammy.

Places, please! (I actually said that) 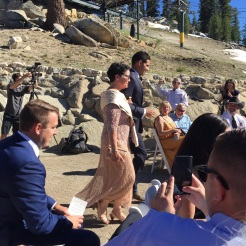 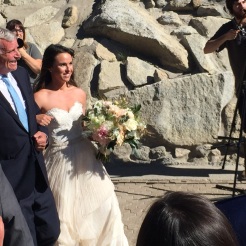 Whitney and her Dad.

Jimmie from his aerie

And finally, Whitney and her dad descended the stairs, both smiling and looking so relaxed and happy.

The ceremony was beautiful – very emotional. David guided Chris and Whitney through the vows and aside from a premature kiss (again, charming), all went perfectly. They were hitched! Then the party began. It was joyous and all the various branches of the family and friends intermingled and got to know each other better. The food was yummy and toasts were given by the parents of the bride and groom, and Justin and Sammy. They were all so different and so moving in their own ways. I couldn’t stop grinning all night. It was that kind of evening. 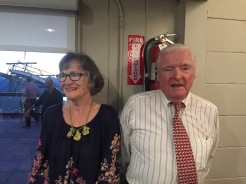 So glad to sit down!

So that’s what we’ve been doing for the week.

Sunday we basked in the afterglow of the wedding with two breakfasts: the 8:00AM Collins family breakfast,

and then a second seating at 11:15 with Chris and Whitney and Skylar, and additional family and friends. That evening, after most people had left to go home, many of Jimmie’s relatives remained to bring us dinner at our condo, after which, we sat on the beach and watched the spectacular sunset. It was a lovely conclusion to the week’s events.

We’re back in LA now, after only an 8 1/2 hour drive on Monday. As we were cresting the hill into Santa Clarita via the 14 Freeway, Siri asked me if we wanted to save a few minutes, then took us twenty-five very twisty miles across the spine of the Angeles Crest Highway to Glendale before wending our way down to downtown. I think she thought we wouldn’t want to leave the wilderness yet. She was right. I’m sorry to leave the Wedding Trail.