W & M have known each other for ever. From back in DC where they worked as interns for some Capitol Hill pols, carrying their bosses’ lunches back to the office, purses over their arms, chattering like magpies.

WAIT! Did you say magpie? Where?

No, W & M, it’s a figure of speech. Let me tell the good people the story.

Last weekend, I was assigned the job of checking in on W & M while their parents were away. I think it’s a wedding – unclear. But W & M live in two cozy apartments near our downtown cozy apartment, and we know the “checking-in-on-the-kids-while-the-parents- are-away-for-the-week” deal. At one point, our policy was to only leave a live person in situ so that things didn’t get out of hand. So I’m an old pro at this. I went to check out the lay of the land on Sunday.

Moms and Dads left last night. So I went to check on the girls after work this afternoon. I opened the door, catching W with the game remote in her paws, cigarette hanging lazily out of mouth, Ark: Survivor Evolved blaring away on the TV. She was busy fighting T-Rex when I opened the door. She dropped the remote like a hot potato, cigarette falling perilously to the floor. I ran across the room and stomped it out, tried to look stern, but she was so nonchalant I didn’t know quite how to handle it. I was completely dumbstruck. Then she dropped to the table like she’d been doing her nails.

You know how tough it is to yell at someone else’s kids, so I just went on checking her food and water, then grabbed the fascinator (I know it’s not really called that, but its such a great descriptor and so current) just to let her know that I wasn’t mad. After all, I don’t set the house rules, her parents do. 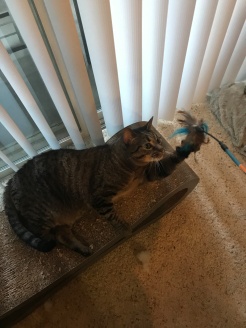 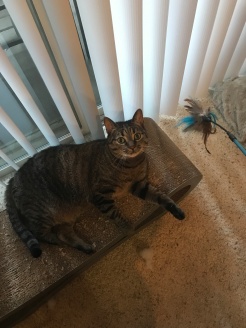 I bid W farewell and made my way down to M’s apartment. I am pretty sure W had called her about my coming because by the time I got to the door, M was wailing. I mean on the guitar in the living room. She was wailing. Sounds came out of that guitar like you’ve never heard. I mean I knew she was good. W’s parents had told me, but I had no idea.

I put the key in the door and turned the knob only to find M sitting demurely by the door, no guitar in paw, looking up at me with ennui. Which is hard for a cat to master. Usually they have the imperious thing down, but ennui is a real affect that they have to master. Ennui, that is, until she realized I was her meal ticket. Then the caterwauling started for real and she wrapped herself around my legs.

I scooped her food and filled her bowl and backed away.

What can I tell you? I know they were both up to something before I got there and then when I arrived, almost all evidence was gone. I’ll have to wait and see what other shenanigans they pull the rest of the week. I bet it will be good. Kids always misbehave when their parents are away.

For now, you’ll have to trust me when I tell you that W & M are living the high life.