We left for the airport on Tuesday, August 17, 1982, driven by Lee Benson, whose new Oldsmobile Cutlass introduced itself to us as a series of rattles, squeals and clatters. After a somewhat contortionist drive, we arrived at JFK, bought a ticket for Bob, and boarded the 7:00PM flight for London. In elegant form, while waiting in line for the ticket, I crouched down to find a more comfortable position with my 35 pound pack, and tumbled backwards with my jump suited, be-purpled legs flailing helplessly in the air. I knew it was going to be a long trip.

On the plane, we were delayed for an hour and a half, but once aloft, flew quite quickly to London. Our seatmate was a lovely English man named Adam, who insisted on treating us both to bottles of champagne in order to celebrate our trip to Edinburgh.

Upon reaching London, we discovered at King’s Cross Station that the train trip to Edinburgh was L32; far beyond our means. Sought out a bus, then settled for the Night Rider, a L12 train leaving London at 10:00PM, arriving in Edinburgh at 5:45AM. Yikes!
Not having slept all night really, we went to nap in a waiting room where there proved to be three extremely loud and drunk assholes who were conducting some kind of “deal” which the entrance of an African disrupted. This interruption created a huge racial contest, refereed by another backpacker who yelled at them to shut up. She was chastised by the instructions – “Shut up, cunt!” Oh, the joys of human interactions.

The taxis are wonderful in London- glossy black sedans sometimes purple or brown, always whizzing by at breakneck speeds.

There is so much to learn. How to use the frigging telephones. How does one distinguish between a “rapid pip” and an “engaged” signal? Oh, for sleep aboard the Night Rider. 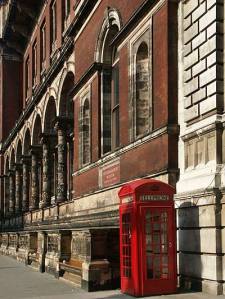 “Don’t blame the Loo lady for the Price

We work our hardest to keep them nice

Hearing all the banging doors

Clean toilets are our special task

A pleasant smile is all we ask!

Later, saw Piccadilly Circus and Carnaby St. – struck me like a mall version of Soho.

Dinner at Sagamantha, an Indian restaurant, which had a beacon above the front door, which was a rotating red police light, and where Bob and I, passing through Phase 3 of our exhaustion, lost it and started spewing water out in a fit of giggles!

If one thing will drive me nuts, though, it is the number of motorcycles. Every time I see one I think of Mark – and they all ride with leather jackets, which may cause considerable discomfort throughout the trip. I miss him…

Edinburgh is delightful. We spent all night on the Night Rider, arriving at 5:30AM to the light of the new rising sun on the age-encrusted city of Edinburgh [ouch].

By our return to the downtown in the afternoon, the place was unrecognizable for the excited buzz of traffic and pedestrians scurrying around.

The tech staff/management at the YMCA, our venue for the first week, is incredibly accommodating and we spent three hours this evening in the space. All props and drops must be fireproofed so tomorrow we will do that.

Had my first spud with cheese (and Bob) at 9:50pm before a 10:00pm rehearsal – I hope to taste more leisurely taters laters…..