The date function on my camera recently stopped functioning. I think it had something to do with the changing of the batteries from Duracell batteries to Ultimate Lithium batteries, at the suggestion of Walter from Walter’s Camera shop, a decrepit little shop where I took my camera to try to determine why it wasn’t quick enough for me to capture pictures.

I know little to nothing about photography. I don’t know an F stop from the F Dash stop where I catch the bus each morning, but I do know something about impatience. I know quite a bit about impatience. Ask my son.  No, on second thought, don’t – he will not get back to you because he’s out fishing for a week or so. That will be frustrating for you and you will become impatient. Like me.

Anyway, so back to Walter. I went there with my Canon PC1431 camera, prepared to drop a few bucks to have him tune it up for me so that I could take better pictures with the camera that my son had given to me a few years ago.  Walter (or the man who runs Walter’s Camera shop, who, according to my friend/colleague Hannah, is not Walter), told me that I just needed new batteries. Nothing wrong with the camera.

So I went to CVS and bought the new batteries, which were expensive enough to make me feel like I had actually done something to repair my camera. Alas, all that happened was the date mechanism zeroed back out so that the camera now thinks all the shots are being taken in January of 1980. Why January of 1980? Is that when my little camera was born?  Of course, the camera was a gift which came without any manual. So I have consulted with very intelligent people to try to reset the date without success. And, due  to it’s natal confusion, the photos it now takes are no longer able to be sorted by “event” but are in a jumble. This means that the pictures I took last Friday of the Senior Designers’ Portfolio displays are now mixed willy nilly with the pictures I took in Los Osos of our great niece’s baby shower over the subsequent weekend. Try it sometime. Take the dating mechanism off your camera and shoot for a weekend then go back in and try to sort them out. Which ones are the local critters?

What happened to me was this slightly nauseating sensation of confusion – seeing pictures of students and work colleagues/friends/family (we spend enough time together that I consider them family) interspersed with beautiful central coast scenery and real family (with whom we do not spend enough time to be as well acquainted as the colleagues at work). That’s a whole other topic.  Not at all clearly defined, but sort of fun, at the same time. You should try it sometime. 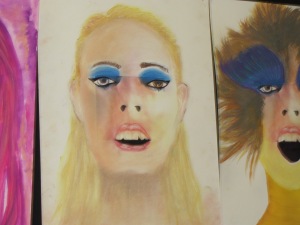