NB: This post was delayed by lack of connectivity while in Alaska. Hope you enjoy! 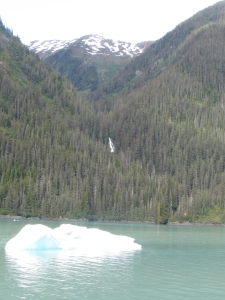 Everything about this un-cruise is extraordinary. This morning, I took a yoga class, on the 300 deck aft, looking out over the water where we were floating just north of the Dawes Glacier, a 200 FT high edifice of ice. I am a long time stranger to yoga, having taken a semester in college, but only once class in the ensuing thirty plus years. Nikki, our yoga instructor was inclusive and helpful, making me feel like I had good form when I know I did not. It felt good to stretch my work weary joints, and I giggled to myself when she urged us to set our goals for the session and the first words flashing through my brain were “to not throw out my hip.”
At one point we stopped the class to peer over the ships railing at a curious harbor seal as he slipped by in the morning light.

We were parked about a half mile away from The Dawes Glacier, and throughout the morning, could heard occasional loud dynamite sounding bursts, following the calving events of ice falling from the glacier’s face by about five to ten seconds due to the distance between the ship and the glacier. 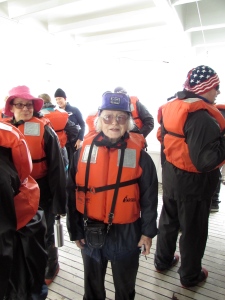 We were in the morning group, who rode the zodiac boats to within about a 1/4 mile of the glacier, maneuvering between the icy growls sloughing away from the face of the glacier on the currents from the under glacier rivers. The front of the glacier is marked by large brown lines, three in total, which show the junctures of several adjoining glaciers coming down from different directions, shoving their dirt and boulder acquisitions in front of them on their way to the waters edge.

There were about 12 of us in the zodiac, all dressed in the suggested layers. I had on my long underwear, a long sleeved T-shirt, a cardigan, a windbreaker, and then the added cruise-provided black rubber windbreaker and pants, my hot pink hat and a pair of socks that I was glad I had brought to keep my hands warm.

The guide, Jackie Hedgepeth, a geologist and marine biologist, was along to tell us about the dramatic rock cliffs surrounding us, and large populations of arctic terms and harbor seals populating the small ice floes, or ‘growls’ around the boat.

Captain Shana powered the skiff, skillfully avoiding the ice, and cueing us to listen for the Rice Krispie sound as we passed close by the pieces, fallen from the glacier, as they released their centuries-old pockets of air into the atmosphere. 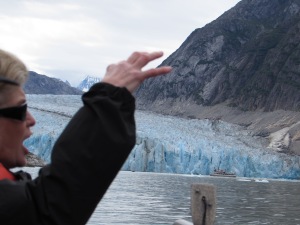 Of course it got much colder as we got closer to the glacier, and after parking to observe the glacier from this closer vantage point, Jackie cheerfully said, “who wants some hot chocolate?” I thought she was joking, but no, unbelievably, she passed out white paper cups and she handed around a bottle of peppermint schnapps followed by the steamy cocoa fom her green thermos. What a great idea it was, and so restorative. There is no misery associated with this cruise.

A lunch of arugula salad with whitefish and a yogurt chick pea dill dressing, and some spaghetti with a veggie sauce made of tomatoes and beets. For the meat eaters, the spaghetti was dressed with an elk sugo. Afterwards, we had a key lime tart which was yummy. Back to the cabin for a nap while the afternoon team got ready to go on the zodiacs. The Morning boat group will in turn have a lesson in how to kayak for tomorrow’s expedition. This is an extremely organized tour.

Tonight at 5 we will see Jackie’s slides how and geology talk.
I am love love loving this experience.