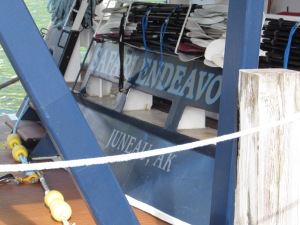 We boarded the ship at about 5:30 tonight, docked on the
North side of the Gastineau Channel. After meeting the captain and his staff, having a brief happy hour, doing the Abandon ship drill, which always fills me with a terror much more vivid than the seatbelt demonstration on the airplane elicits, we settled down for a civilized dinner on the first deck of the ship. This trip, so generously offered to us by my Dad, came out of our discussion last summer at the Cape, when Jimmie said, I’d like to go to Alaska sometime. And my Dad, ever game for an adventure, said, “we’ll do it!” I at the time thought, “Yeah that won’t happen.”
I was thinking that I would not be able to get away, but here we are steaming out of the channel, past the three super sized cruise ships and toward the snow covered mountains surrounding Juneau.
The passage is lovely, lined on both sides with pines, it is the largest rainforest left on the planet, in southeastern Alaska, constituting 80% of the remaining rainforest in the world. Alaska’s population is 700,000, less than 1 person per square mile. The state is about equal to 1/5th of the continental US.
(I decided to read James Michener’s Alaska on the trip, and what a great idea that has been.) 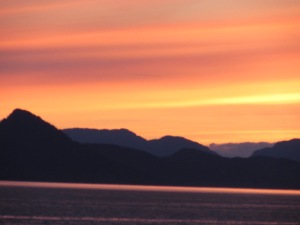 I saw a beautiful sunset tonight off the back deck. We are situated on the back muster deck, and if I roll out of bed tomorrow at 6:30, I can attend the yoga class before breakfast. We will see how that goes.
Also, the hot tubs are on the back deck.
My brother Larry, the fisherman, was sitting at dinner and grinning from ear to ear as we watched the scenery gliding by. 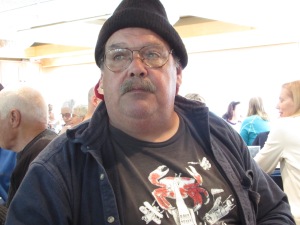 How fast are we going? I asked him, because it seemed like we were going at quite a clip. About 12 knots, he replied.
Traveling with three octogenarians has its challenges. After boarding the ship up the gangplank, which was quite steep, we climbed three flights to our room, dropped our bags, then came down to the second level for the cocktails, up to the third level for the muster drill, down to the first level for dinner; up to the second level for the slides how about coming events, then finally back to the third level for bedtime. Jimmie is exhausted, and after our night last night at the Baronof Hotel (we call it the bare enough hotel), where the outside street noises were present enough to hear all the colorful sodden language of the passers by, we should sleep well tonight.
I can’t wait for tomorrow.