The ladies who lunch in my building have recently amused themselves with a post prandial game of what I will call Tinder-round-robin. After we eat our various luncheon options,  mine likely leftover Quinoa and black bean salad with a lime and cumin vinaigrette, the others’ burgers from The Habit, or healthy-by-the-pound food from Lemonade, they begin to pass a phone around the table taking turns swiping and discarding human beings at a rate of about 15 per minute.

I’ve heard of speed dating, but 4 seconds to eliminate someone from your sphere on the basis of what–their hair style? The color of their T-shirt? The fact that they are wearing a T-shirt rather than a suit? Their pork pie hat? Their dog’s pork pie hat? That seems insane.

I don’t need to explain how the Tinder app works for most of you millennials, but for those of you who are either old and married, or old and single and more inclined to the speed of speed dating, or are less familiar with the bells and whistles on the mini computer you carry  in your pockets, here’s how I understand it works. (Hyper-speed daters, please feel  free to correct me if I have got it wrong.)

You sign up. You create a profile saying what it is you are looking for in a date. You start playing. Presumably it sorts your audience into the opposite gender, and by age and race. Hmmm. I wonder if there is an LGBT Tinder app? Nope. I just looked. You can thank me later for the idea. You can call it Glinder. That might be particularly challenging – the sorting function, I mean.

Anyway. Ready to play? You begin to see the faces of your potential dates on the screen, and according to the direction you swipe their pictures, to the left for no, to the right for yes,  you determine if they have a snowball’s chance in hell of getting to talk to you or date you or…not.

This is extremely entertaining to those of us with our single colleague’s best interests in mind, and discussion ensues about the cuter guys who flit across the screen. It is actually much more entertaining for me  to watch their faces as they swipe. Unified wide eyes and open mouths gasping or chortling as an arrogant-looking man’s face pops up on the screen. There is a lot of  armchair quarterbacking going on here. These women know what they want in a man for their friend. 95% of the swipes are to the negative side. Those people are lost in the tinder abyss, never to resurface again. Even the ones you inadvertently swipe the wrong direction. Oh no! There went Mr. Right!

The 5% of possibles are debated. The phone is quickly passed across the table to the phone’s owner, who looks at the pictures (one is allowed to include several) and tersely adjudicates yes or no.The sorting continues. One fellow merited the phone pass and a yes, with permission given to swipe yes. About five minutes later, the player holding phone suddenly yelped and said “you got a match” whereupon, the owner of the phone authorized a chat with this fellow.

Wow did I feel  sympathy for this guy; he didn’t know what was coming with 8 women, the median age being about 45 (yes, I skewed the age up) assembling tinder texts by committee.

Cut to last night, when our son arrived home for his birthday weekend with his girlfriend, Whitney.

After a lovely steak dinner, we gathered in the living room to watch the Red Sox get trounced again by Seattle, where our guest was from. I tried to be gracious about that, but it was hard.

“So, how did you two meet?” I wanted the meet cute story directly from the two of them.

Chris laughed nervously and said,  “I’ve been waiting for that. Uh, we met through a dating app.”

“You met through Tinder?????!!!!!!” I practically shouted. I got so excited. Here was an anthropology experiment in progress and I could observe the after-effects of this dangerous dating app.

“Tell me everything,” I said, trying not to look too eager.

Chris is not the most linear story teller, but the gist of it goes something like this:

The two of them met on Tinder, and after chatting a bit by text message, Chris sharing a bunchabullshit with her about being a dolphin trainer (no, not a Miami Dolphin trainer, an actual porpoise professor), and, in spite of that, she suggested that they meet for a coffee.

He lives on a boat at Fisherman’s wharf, she in a studio apartment on Nob Hill, and so they chose to meet at Cafe Divine, in North Beach. 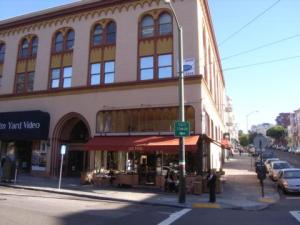 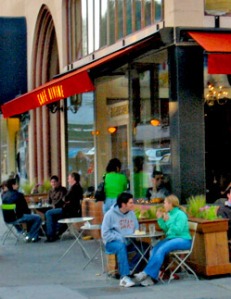 Chris arrived first, walked into the cafe, looking around for the cute girl he had met on Tinder. He spotted her, the first girl he saw, but, wait….she was about 15 and sitting with her parents. What?????!!!

When Chris told this part of the story, he looked physically ill, his eyes widened, and he gulped incredulously at this un-intended match up. He shook his head, continuing to scan the place, not seeing anyone else who resembled his match.

“I need a beer,” he thought, and in his confusion, marched over to the counter and ordered a beer.

Whitney picked up the story now.

“After we had talked a while on Tinder,” she said, her face lit with the same kind of affectionate forgiveness that I frequently sport, ” we decided to meet for a coffee. I walked in for the coffee, and Chris was there with a beer in his hand. I decided to have a beer instead, and we ended up talking until the place closed.”

“Did you tell her what happened when you walked into the restaurant? That you thought the 15-year-old was her?”

“Of course,”  he laughed, laying his hand  on Whitney’s knee. She laughed. We all turned back to the game.

Here they were sitting in our living room, happy as clams, having found each other through a 4 second encounter on their smart phones. Dang it, if that isn’t enough to make me a convert to technology, I don’t know what is.