Several years ago, an old friend of my husband’s from back in his “Greenwich Village days,” in the 1950s, Peter Harvey, notified us that he would be coming to town for an exhibition of his paintings at a little gallery on Melrose, just west of La Cienega. Did we want to attend? This was in about 2008, I think.

Peter is an accomplished painter, as well as a very experienced theatrical scenic designer, and Jimmie had worked with Peter and known him well socially back in New York.

Of course we wanted to go to the show, and before going, we had discussed rather seriously that we would  buy one of his works at the gallery to support him.

We arrived at the gallery at about 7pm, I from work, and Jimmie from home.  I went to park the car nearby, returning to the small gallery, which was filled with jovial friends of Peter’s – mostly gay men, but there were some women there as well. I found Jimmie, and we began to circulate around the room, enjoying the colorful, large-scale paintings on display.

Text/Eros was the name of the show

It soon became clear to us – I don’t know, call me provincial, prudish, too straight, narrow-minded – that we were unlikely to find a painting for our living room among the canvases in front of us.  However, one painting was really lovely and G-rated enough for our lives. 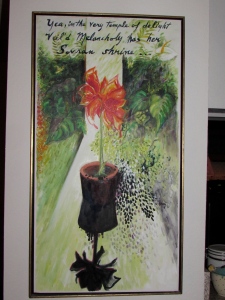 There were many paintings in the gallery with text incorporated into the body of the painting, and this one, though inherently a bit sad, had a warmth and theatricality to it that caused us to gravitate to it.

We made the deal and after the show closed a few weeks later, picked up the painting and hung it in our dining room. I actually painted the walls of the dining room to better show it off.

While we were at the gallery, I also thumbed through a portfolio of water colors, and stumbled upon a lovely and saucy watercolor of a “woman of a certain age” flaunting her zoftig body with insouciance  on a coverlet splashed with bright pink flowers and Peter’s jaunty signature at the bottom of the blanket. I fell in love with the Pink Lady. After the show closed and Peter went back to New York, I thought about her.

My 50th birthday was coming up and Jimmie asked me if there was anything I wanted for my birthday. I said wistfully, “I can’t stop thinking about the Pink Lady. She is just the epitome of what I feel like 50 is about. Take it or leave it.”

And so, the Pink Lady came to live with us. She graces the wall above my desk at home, and I can glance up at her when we are reading in bed before turning out the light.

And as I lay on the couch tonight in the living room, I was looking up at the Ode On Melancholy painting that we had bought originally, and decided to look up the ode which inspired it.

No, no, go not to Lethe, neither twist
Wolf’s-bane, tight-rooted, for its poisonous wine;
Nor suffer thy pale forehead to be kiss’d
By nightshade, ruby grape of Proserpine;
Make not your rosary of yew-berries,
Nor let the beetle, nor the death-moth be
Your mournful Psyche, nor the downy owl
A partner in your sorrow’s mysteries;
For shade to shade will come too drowsily,
And drown the wakeful anguish of the soul.
But when the melancholy fit shall fall
Sudden from heaven like a weeping cloud,
That fosters the droop-headed flowers all,
And hides the green hill in an April shroud;
Then glut thy sorrow on a morning rose,
Or on the rainbow of the salt sand-wave,
Or on the wealth of globed peonies;
Or if thy mistress some rich anger shows,
Emprison her soft hand, and let her rave,
And feed deep, deep upon her peerless eyes.
She dwells with Beauty—Beauty that must die;
And Joy, whose hand is ever at his lips
Bidding adieu; and aching Pleasure nigh,
Turning to poison while the bee-mouth sips:
Ay, in the very temple of Delight
Veil’d Melancholy has her sovran shrine,
Though seen of none save him whose strenuous tongue
Can burst Joy’s grape against his palate fine;
His soul shalt taste the sadness of her might,
And be among her cloudy trophies hung.