Today we attended the memorial for Phil Sparta who passed away, September 3, 2014.

We gathered under the cool green foliage of the Dallidet Adobe Gardens in San Luis Obispo. We had driven up the night before from Los Angeles,  staying overnight with some generous friends of Phil’s and his wife Martha’s along with Stella, one of my husband’s nieces by marriage. 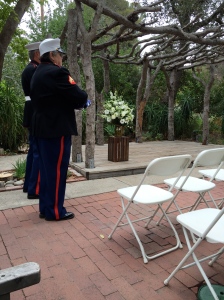 The memorial began as  eight Marine Color-Guard members in full regalia performed  military honors for Phi, a veteran of the Vietnam War. There were three rifle volleys, the shell casings, gathered from the sandy floor of the garden, and presented in a pouch by a Marine who knelt in front of  Martha. The American flag, unfurled and held tautly by two of the Marines while taps was played, was then refolded and presented. The pageantry of the ceremony was intensely moving and sobs were audible among the assembled friends and family.

Martha’s mom was my husband’ older sister.  And it was Phil’s extended illness, ironically, that allowed us to get to know him and Martha so well. Martha has always been a role model for me. It was she who resuscitated my interest in the piano after 45 years away, when she announced on one of our visits that she had taken up piano lessons.

“I could do that, ” I remember thinking to myself.

She owned her own business and always speaks her mind. She is practical about everything and always seems so sure of herself.

Phil had contracted hep C from a transfusion back in his service days in Nam, and thereafter,  his liver had been prodded, tested and photographed by his medical team at USC.  But you would never have known from looking at Phil that he was ill. He was warm and funny, irreverent and spiritually deep,  gruff, and tender – a lover of people and good music and good food.  He always had a big smile on his face.

We heard a lot about his love of BBQ ribs today from his loving and loyal friends, and about his skills as a chef. He and Martha came to LA for his medical visits. We fell into a predictable pattern. They would arrive on Monday afternoon, and we would meet them for dinner, either at the Los Angeles Athletic Club, where they often stayed, or at CPK, and after a cheery dinner with them, they would go to the hospital in the morning, have his tests and then drive home to Los Osos.

Their visits  were about every six months, and no matter where I was in my crazy work schedule, I was able to schedule that dinner with them, and always looked forward to it. Martha gave us about two weeks notice, and it was on the calendar and we made it happen.  And last year, a few times they stayed with us at our apartment, which was like a high school coed sleepover except without the booze and backstabbing and panty raids.

On one of the last visits to LA, we went to dinner at the LA Athletic Club on a Thursday,  Jazz Thursday; where they had a  combo with an extremely vivacious and dynamic singer. Phil and Martha had just been down the weekend before to attend a Zydeco music festival with some old friends, and they recognized her from the festival. Getting up between sets, they went to greet her, and she beamed with happy recognition at both of them as they neared her. I know the feeling. People were always  happy to see Martha and Phil coming. They brought the singer back to the table to meet us and I thought to myself “How wonderful that Phil and Martha have such talented and friendly, interesting people in their lives. “

In the last year, Phil’s doctor visits became more frequent, – the numbers had changed – again, information we received with concern; and yet, Martha was always so matter-of-fact about it and Phil looked so well and was so jovial at our Monday dinners.

Martha and Phil ‘s daughter, Bianca, married Dustin about two years ago at a colorful and joyous wedding in Oakland which we attended, and recently, Bianca and Dustin welcomed their son Percy into the world.

We attended the baby shower on Mother’s Day weekend, meeting all of Martha and Phil’s friends and watching the young expectant couple unwrap a promising array of baby gifts. Phil spent most of the time that day cooking truckloads of meat out on the grill. Why  hadn’t I sought him out that day to talk in the cool air while he cooked for all of us? Phil did have a brief visit with baby Percy, just before his condition worsened and he came back to LA. He beamed when he talked about his grandson.

Phil was colorful. He told great stories. On our last visit with him in the hospital, about a week before he died,  he shared the story of his near death experience in 1971. He told about losing consciousness, and being bathed in the white light, and feeling a terrific sense of compassion and love. He said he heard a voice saying “Go back. It’s not time yet.” He was weak, but recounted this to us with calmness and serenity; he said he felt ready and he had lived a good life, and he wasn’t afraid of dying. He was secure in the love of Jesus Christ and he knew that he would be taken care of.

See, Phil always had a way of making you feel better. He would make you laugh with a joke, or a quirky way of looking at things. He had complete integrity. You always knew where you stood with him. And the time we had with him and with Martha was precious.

trees at the Garden with all their friends,  it was almost as if Phil was there, urging us back to the buffet, cranking up the music so that we would all enjoy ourselves. That would have been so like Phil.