Summer Brave at the McClintock Theatre

What does it mean when you have no incentive to write? Are you muse-less? A-mused? I don’t know if I am just too tuckered out to be creative, or we have reached that point in the semester where tech upon tech upon opening upon strike has set in, but the creative juices aren’t juicing right now.

However, some nice things have happened. I can tell you about those.

I got to sit in the theatre last weekend with the beautiful set for Summer Brave, that open-faced, honest Midwestern wooden bungalow with lace curtains and well worn paint on its siding, courtesy of senior design student Dreem Qin. It had the same effect on everyone who ventured into the space- “We’re home and we’re not leaving” was the vibe. I asked if we could keep the precious haven in the theatre just through Christmas, so that we might decorate it with fat evergreen boughs and candles in each of the windows- you know, a place for faculty, students and staff to retreat to and do yoga, or meditation or just sip a cup of tea with cookies.The warm lamps would beckon us into the rooms beyond the front screen door, which now clatters with the current show’s familial traffic: Flo Owens and her two spirited daughters, Millie, the bookish one, and Madge the “prettiest girl in town” and the bitter, but determined Rosemary Sydney, a schoolteacher whose long term sights are set on businessman Howard Evans.

But alas, we will need to strike this set on Sunday so that the 1950’s Cubo-Floridian world of Nilo Cruz’s Anna In The Tropics can take up residency in the space.

Sad is my plight, that even as I sit waiting for the first dress rehearsal to begin, I am taking a mental inventory of the props and scenic elements so that I can prepare strike notes for the following Sunday. It is a telescoping of time that may be familiar to others in my age bracket. That same omniscience of the overall arc of the process prevents me, a life-long pet owner, from getting a new puppy. I already know how the cycle ends. And yet this cycle I embrace fully and with passion.

I’m not sure that anyone besides the stage manager even reads my strike notes, but they are my informal way of giving structure to the process of demolition, my eulogy to the ephemera that is a college production. What is any production, really, other than a list of objects assembled from the psyches and sweat of so many people to bring shape from a mere wisp of a dramatic idea to full fruition. The sketch that pours from the pencil then turns into the AutoCad drawing, that morphs into a wooden or steel structure encrusted with layers of paint. All is dressed with props that have appeared in so many productions that if they were to begin whispering among themselves,  the roar would overtake the current play like the flames that destroy the redwood stand yet upon which the redwoods depend for their continuity and rebirth. My strike notes are banal, cold, unrepresentative of the caring caresses of the artists whose decisions and considered groupings bring life to them as denizens of Inge’s story.

First- remove birdies from under eaves

Broom goes back to the Bing

Last week’s strike notes had included a graphic I found after deciding that all the strike notes needed a visual brand. Perhaps my blogging has impacted my work. Anyway, the strike notes for The Dream of The Burning Boy had this heading on them. 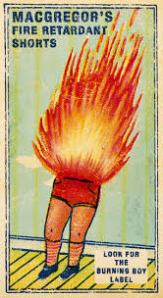 I haven’t yet chosen the image for Summer Brave’s notes.

But yes, spending time in rural Kansas in the 1950s -that has been nice.

Yesterday, I had the pleasure of seeing two college friends with their accomplished graduate school and college ready children come through to sample what USC might provide them. We met for lunch under the awnings of the Tutor Campus Center. Charlie and I had both attended St. Paul’s and Princeton; his wife, Penny and I, just Princeton. The time telescope was soundly closed as we rambled briefly through the ivied portals of our shared educations, their children listening politely. We spoke about what the future would look like for their two children, both embarking on lives enriched by the arts. Selfishly, I hope their journeys include time spent at USC; how lovely it would be to reconnect with Charlie and Penny, and to get to know their next generation.

But for now, the busy days unfurl ahead. The lists of construction and destruction. The strike note flames of Summer Brave begin to lap and flicker up around the beautiful little cottage in the McClintock Theatre even as the remaining four performances still lay ahead this weekend.

Won’t you please come and pass some time with us in William Inge’s painful yet pretty landscape?