It is the end of January, so it must be Tech time for the MFA Rep, and indeed, last night and tonight, we began the tech for “The Servant of Two Masters,” directed by Andy Robinson and opening on February 7, 2015 at 8:00PM in the Scene Dock Theatre on the USC campus.

Three things happen at the end of January, like clockwork, every year.

1. We tech the three play Rep.

2. Many of the faculty decamp for points east on their recruiting efforts. New York, Chicago, and then back out to San Francisco.

3. A huge blizzard sweeps into the east coast knocking out all means of traveling in and out of New York.

I mean literally every year this happens. Every year those of us left behind to tech the rep talk amongst ourselves about whether we will ever see our itinerant colleagues again. We envision them getting stuck in a snowdrift somewhere between LaGuardia and the midtown Manhattan hotel where the auditions happen. Meanwhile, we crank up the air conditioner in the Scene Dock Theatre and throw some plates around. We’ve been watching CNN for two days now, as the intrepid reporters stand in the deserted streets, or drive in the traffic-restricted streets while telling us to be safe. We are sitting in the middle of Los Angeles in 70 degree weather crafting a play.  Molly, our fearless stage manager, keeps us focussed on the action on stage, as she runs the tech with grace and agility. This has been one of the quickest techs yet. Molly is an alum, my heart swells with pride while I watch her stand from her table and cross the room to speak quietly with the director; after a brief consult, she makes an announcement that we will just be running through the restaurant sequence and releases everyone else from the tech. It’s 7:30 and I thought I’d be here until 10:00. That’s important news, or at least it matters to me.

Tonight, after tech was over, I stopped by my nearby grocery store for a few staples – lip gloss, napkins, heartburn medication, some snack packs for the rest of the week, when my days stretch like fussy felines, from 9:00AM to 9:00PM. Last but not least, I picked up the latest issue of “In Touch” magazine. Subtitle: With What Matters This Week.

I couldn’t resist;  the front cover of the magazine carried a picture of George Clooney and his new bride, Amal, looking none too happy to be captured by the invasive lens of the paparazzi. If looks could kill. I picked it up for my ladies at lunch, but when I brought it home I couldn’t pry it out of my husband’s hands. I mean, who can blame him? It’s hard to resist a two page spread of photos of our favorite female celebrities out doing errands without makeup, each picture worse than the next, each one with a little round inset picture of them looking radiant with make up on. I told him I was glad I wasn’t a celebrity because I wouldn’t have the inset photo. My inset photo would also be bare of makeup, and trust me, my friends, that ain’t pretty. Other features included: Jen’s Secret Revenge on Angie, an article about how Jen and Angie avoided each other at the recent SAG Awards, or Desiree’s Dream Wedding.

The In Touch Magazine cover read “George and Amal’s Nightmare”  “$200M Divorce” “How it all went wrong in only 4 months.” I couldn’t take a picture of the cover fast enough to share it with my friends. I texted the photo and within seconds, back came the responses: “Do you think it’s true????”

I wonder if the writers who work for “In Touch” magazine have as much fun in their artistic process as we do in ours. Looking around the theatre tonight, I watched the students who were assisting the designers in the theatre: Zach, sitting at a table in the house, was meticulously cutting parchment letters into the correct sizes and folding them, then applying sealing wax. His enthusiasm was infectious. I snapped a picture of him and sent it to Hannah, our props supervisor, just to prove that we could still get some things done even while she was away.

Haley, the Lighting Design PA, padded around the theatre in her striped socks, something any self-respecting production manager would call her out about. She was busy adding diffusion to an LED strip light backstage which was too bright. The set had been meticulously swept by the two ASMs, Lexi and Maddie, so I thought Haley would be safe for tonight.

Throughout the tech, whenever I had a comment that needed to be heard,
I would turn to  Bucky the Budget Skeleton, who was waiting his turn to perform in the Rep. He doesn’t tech for another two weeks, so stood silently in a vacant space behind one section of seating, leaning casually against a pair of orange ladders. In this phase of the Rep Tech, we are still figuring out where the storage will be for all of the furniture and props. Bucky is supervising that process on the front of house side for the time being.

Backstage, a table full of yummy looking props awaited the restaurant scene. I tried not to pass that table before tech began, because my dinner paled in comparison with the available entrees on the table backstage.  These were constructed under Hannah’s supervision, by several of our production students. That must have been fun! Those In Touch Magazine editors have got nothing on us… 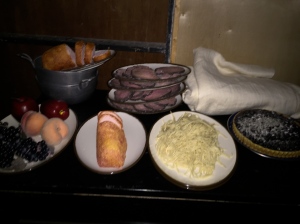