Tonight we attended the LA Screening of Adam Soch’s film about Reza Abdoh‘s life and work, work that Adam himself had collaborated on and has now assembled from over 20 years of footage taken in the theatrical trenches with Reza and his Dar A Luz company. What struck me most in the film was the commitment of the artists in Reza’s tribe, and how much joy and laughter, lightness really, was derived during those long hours in the theatre supporting his less-than-light vision.  Reza Abdoh Documentary Film

It felt important to celebrate his work with old friends but the guest of honor wasn’t there; Reza died on May 11,1995, twenty years ago almost to the day. I think he would have been pleased with the film, which captured the gutsiness and drive of his life and work; but more likely not, because, as the film pointed out, he was not ever fully satisfied with his work. Reza always let his collaborators know that there was room to improve – to go faster and fiercer.

I look forward to being able to share the film (after it makes the documentary film circuit) with my students, friends, and family. The intensity of Reza’s passion infused all of us. Michael Angel, now a filmmaker, then a crew member on two of Reza’s productions, said

“It was very hard to say no to Reza, when he stood in front of you and said, ‘I really need for this to happen. Can you make it happen?'” 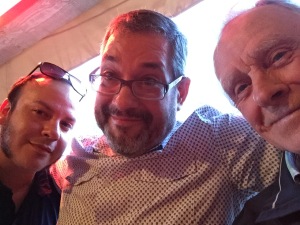 Many of us discussed this “can-do” hangover/attitude/disease/tendency after the film tonight.

Stage managing a show as complicated as “Bogeyman” was has given me the confidence to do just about anything my heart has desired in my life. It has also made it very hard for me, and others, I found out tonight, to say “No, that isn’t possible” to directors. People call Production Managers “Dream Crushers,” because they bear bad news about limited resources and possibilities. I think my brief brush with Reza’s process simply reformulated my understanding of what is possible and what isn’t.

All of Reza’s youthful artists are now twenty years older, no longer cherubic young theatre technicians and actors, but nonetheless still committed to their work in theatre, or academia, or film. We toughened and wised up in theatrical boot camp with Reza. Reza’s now mature Dar A Luz company members, whose beautiful bodies were tasked with grueling emotional and physical choreography twenty years ago, now have the opportunity to celebrate Abdoh and his importance to the theatrical canon and to them as individuals.
Thank you to Adam, who has been the keeper of the flame for all these years. And thank you, too, to Reza’s long time collaborator and friend, Sandy Cleary-Wade, who co-produced the film with Adam.

I urge you to see this inspiring film as soon as you can. It reminded me that it’s okay to be fierce as an individual artist, and collectively in  your chosen artistic tribe.