Our wonderful contractor arrived by 8:30 on Wednesday, the appointed day, and by the time I left for work, the two plates of glass that had clattered for years to represent a shower door had been escorted out the front door of the apartment. By the time I got home Wednesday, the bathroom was gutted. No more coffin bathtub, no more medicine cabinet. 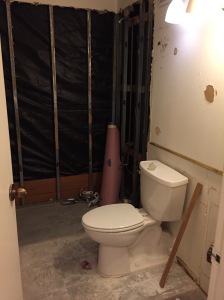 I feel terrible that my big brother, Don, just visited us a few weeks ago, his first visit to our downtown LA home. We will encourage him to return once this process is over.

Remodeling is an act of reclamation, an opportunity to make the world (or in this case, just a 10′ x 10′ part of it) a little better. It’s about choosing beautiful materials and nestling them up next to each other so that they complement each other in a harmonious whole. It is about that aha moment when you are digging through a closet and you rediscover a beautiful water-color that you had archived in recent years but which now sings the song of the room you are re-doing.  It is about the efficacy of the online ordering process at Home Despot, which means you don’t have to go to the store at all. It is the voilà at the end which makes you feel tremendously accomplished.

The other part I love of about remodeling is when things go wrong. I am pretty sure my contractor doesn’t read my blog so I’m safe in talking about this, but for me, in life, as in the theatre, as in remodeling, the challenges are what make us stronger/better/experienced.

What went wrong this week on the remodel? Plenty. I had used the handy ordering tool at Home Despot, ordered the tub, the fixtures for the tub, and the vanity. What more do I need? Well, my agreeable contractor Melvin  informed me, the stem valve for the behind the wall part of the tub, as well as the drain mechanism.

That doesn’t automatically come with the tub?

When I ordered the parts, I knew the size of the tub, and not being a plumber, didn’t know that those other parts weren’t just off the shelf parts at Home Despot. The fixtures were so reasonable – $129.00 for heavy-duty chrome shower head, shower controls and tub faucet. That was until I had to spend $258.00 for the valve to be express-shipped. Crap. And the drain, similarly had to be sent express so as not to stall the project. The drain stem arrived on Friday, allowing the work that needed to be done to get finished before the weekend. The medicine cabinet, towel bars and robe hooks arrived on Friday and are sitting quietly awaiting their turns to enter the space. 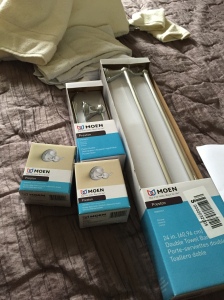 The space is looking pretty horrific now. You know that time during the load-in in the theatre when there are tools piled around the backstage area, after the carpenters have finished for the day? That’s the way our guest bathroom looks now. Come to think of it, it is probably the familiarity of chaos that I also love about remodeling.

I remember my first remodeling project – again, a bathroom in our first house in North Hollywood. It was a one bedroom home, and Jimmie was back east filming his TV show, “The Days and Nights of Molly Dodd.” We were not parents yet, and I decided I would tackle the remodel project with a friend from the theatre where I was working prior to Jimmie’s return home. Late at night as I was about to go to bed, I could choose to A) creep out into the back yard to squat in the sandy soil like a feral cat, or B) get into my clothes and drive to Denny’s at the corner of Burbank and Vineland to use the bathroom there. I did both over the week or so that the toilet was out of commission. Nope, not my proudest moment, and trust me, it is much more convenient to remodel one of two bathrooms than one of one.

What else went wrong? The tile company called to say that two of the four types of tiles I had ordered were on back order until the end of August.  I called and discovered that the floor tiles were all right, just the subway tiles were not available. A quick trip to the tile store the next morning gave me the opportunity to pick almost identical tiles to the ones I had chosen before. They are 1/2 inch narrower, but almost the same color as the original ones.

Today, the tile arrived. Yesterday, the tub and vanity arrived. There is now so much in the bathroom that you can’t even get into the room. They installed the tub today, and tomorrow will begin tiling. Lighting fixture arrived today. It’s a stretch to believe this is going to turn out all right. Sort of like every creative endeavor.