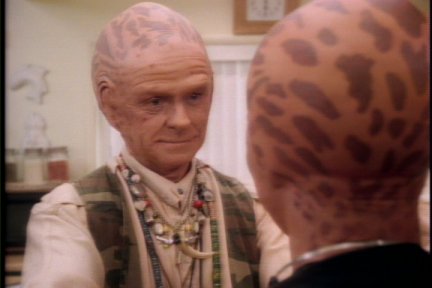 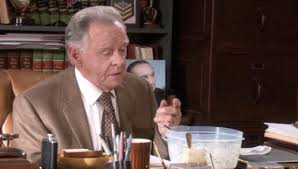 Recently, my husband’s great niece’s daughter, who is 3, saw him on a rerun of a Parks and Recreation episode, where he plays the cranky Councilman Milton, a misogynistic, racist, and largely decrepit city employee who sleeps more than he participates in the show’s council meetings. When his character is awake, he’s spouting ludicrous non-sequiturs, things that for anyone who knows him, are anathema to his perennial sweet and witty disposition. In other words, it’s a fun character that he really enjoyed playing, and, because he’s such a good actor, he was convincing in the role. When her mother pointed him out, their exchange went something like this:

What’s he doing there?

Boy, that’s a tough one to explain to a 3 year old. We had just spent a week with Saoirse, where Jimmie had read her “Where the Wild Things Are,” and had given her Uber rides around the rental house on his sporty walker. In fact, I recently came across a video from her 1st year where she was visiting and Jimmie was trying on some hats on her. She saw her reflection in the kitchen garbage can and smiled at the recognition of just how good she looked in that hat. Well, maybe it was gas, but it seemed more determined than that.

Sometimes it is a good reminder to be asked the most basic questions of what is special about the world we live in and our options for work in that world. I guess we should be grateful that her first exposure to Uncle Jimmie wasn’t in his role as Uncle Moodri, in the TV Series “Alien Nation.” There might have been a lot more questions at that point!

How does one begin to explain to a 3-year-old why a grown man would dress up and play a role that is as repulsive as Councilman Milton? I can only imagine the other questions voiced or unvoiced by Saoirse in that moment of recognition:

How does he get to be in the TV?

Why is he so mean?

How to answer these questions?

How long has he been doing this?

Are there other places we can see Uncle Jimmie?

But probably the most frightening question for a parent is the inevitable one:

How do I get to do that?

What does it take to become an actor?

Here I’ve provided a helpful link for those of you who are thinking about becoming an actor or who have children asking the questions. Careers – Actor

As someone who teaches a technical theatre class in a private university, a class which is predominantly populated by actors, I see hundreds of actors come through in a four year period, all of whom had that moment of questioning and discovery that Saoirse had yesterday. Now, she may not ask the (for some parents) scary questions that result in hearty attendance at our THTR 130 class, but she may, too. Is her Mom ready to answer them? I bet she is.  Time will tell if Saoirse follows in Uncle Jimmie’s footsteps. We will try not to influence her too much in such an important decision.

One Reply to “What’s An Actor?”