I just finished reading an ebook on my Kindle, which Jimmie had recommended, which both delighted and depressed me. I finished it in two days; the novel, called “They May Not Mean To, But They Do” by Cathleen Shine, describes a wife and her relationship with her husband of many years as he dies, her resulting widowhood, as well as her relationships with her children and their children. It isn’t a happy read, except that Shine’s wit and humanity provides for some truly funny passages; the book is quite moving and perhaps, too close to home. I think Jimmie regretted the recommendation as he got further along in the book. I did not regret it at all. 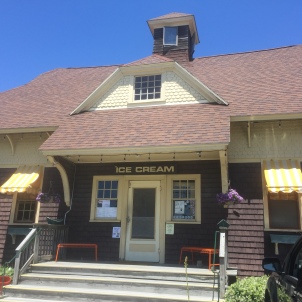 At Logan Airport, we were met at the door to the Jet Blue terminal by a friendly attendant with a wheelchair. I’ve not seen them trolling the front of the airport for clients, before, but I was still grateful for his presence there; he took us directly to our gate where we were only 3 hours early for our flight at 6:40PM. We sat and read the paper, took naps, waited for the plane to board. Being old has its perks – you are always the first ones to board, and you get fussed over a little. I remember being excited years ago to have a child under 5 and getting the privilege of boarding early. Everyone should be so lucky to have the generational spectrum that I have had to have boarded early for 5 years, then boarded like a peon for 15 and now boarding again with the elderly for 20 plus years. It’s been pretty sweet.

At JFK airport, another kind attendant stayed with us from departure from the plane through baggage claim all the way to the taxi line. Since we’d taken almost an hour to complete that journey, I grew attached to him, tipping him generously. It is  nice to have a helpful person along when you are hauling two large suitcases, a cane, a heavy bag on your shoulder, and a walker. JFK has just reorganized its taxi pick up location, so you have to return to the 2nd level, take the skyway over to the opposite side, and then elevator down to the street. Had we been alone with just the walker etc., it would have taken us another 2 hours to get out of the airport. I was really happy to have Vincent along.

As our cab rolled up to the Algonquin, the cheery bellhops greeted us with a warm “Welcome back!” Though it was 9:30pm, our room wasn’t quite ready and so the manager treated us to dinner in the lobby and we got to our room around 10:30pm. Lovely upgrade to a King Size Room. I suspect they saw us coming in with the walker and all the suitcases and decided we should be given a room with a walk in shower rather than a tub, and that’s what held us up. We’ll never know, I guess, but these things are the perks for living a long life.

On Sunday, we had tickets to see The Humans, the Tony-Award winner for Best Play this year, starring two Tony Award winners, Jane Houdyshell and Reed Birney. The Humans is playing at least for now at the Helen Hayes Theatre. We had bought our tickets online several weeks before the auspicious Tony awards were won. I’ve lived in California too long, because I assumed that the theatre would be ADA compliant, with an elevator to the mezzanine. More folly mine, because when we arrived I noted the three steps up into the lobby, then another flight and a half to the mezzanine; I realized  I had made a rookie error in not booking orchestra seats. 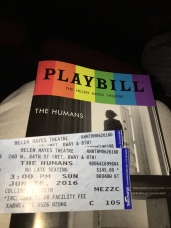 Jimmie was a trouper, climbing the steps extremely slowly (I dropped the walker off with an usher downstairs in order to assist him). When we got to the top, another usher helped Jimmie down to the third row of the mezzanine where we sat in our center row C seats. They were excellent seats unless, of course, you were 89 and hard of hearing. Then they were pretty much the worst seats in the house.
Jimmie donned the listening device, and about three minutes into the play, I looked over and he had removed them and was staring blankly ahead. I dove diligently into my purse to retrieve his hearing aids and helped him back into them, but he was still unable to follow the dialogue. The play also has the dramatic action of lights going out throughout, so the stage was plunged into increasing gloam, which for the HIP (Hearing Impaired Person) is the equivalent of Death by Chocolate, but not in the good way that Death by Chocolate ice cream can be.

Things that make it hard to hear in the theatre (Directors please take note):

So our theatre outing was pretty much disastrous. And I loved the play. A redeeming feature was that my friend William J. Barnes is the PSM, so I was able to go backstage to see him and met almost all the actors on their way out of the theatre. 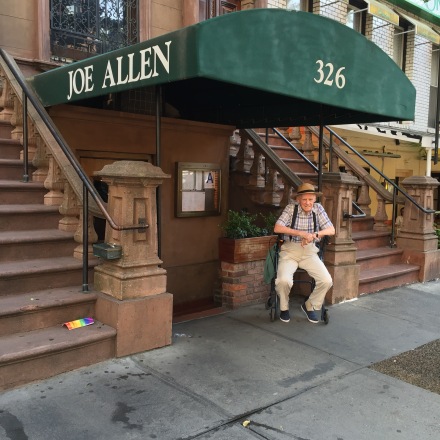 Jimmie and I then walked from the Helen Hayes Theatre to Joe Allen’s, a short walk for me, but a very long walk for Jimmie. At Joe Allen’s, we met our dear friend Jackie Gardner, and Jimmie’s stepson, Frank, for a quiet dinner at a corner table in Joe Allen’s. 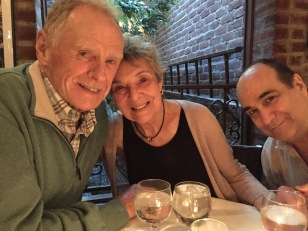 I will forever associate Joe Allen’s with my triumphant moment after a short run of Hughie, starring Al Pacino and Paul Benedict at the Mark Taper Forum for which I was the stage manager, I went to NY and walked into Joe Allen’s. Mr. Pacino was ensconced with friends at a table in the back of the restaurant.

Els! (He calls out across the crowded restaurant.)

Al! Great to see you! (Sound of dozens of heads craning toward the mysterious Els.)

The waiter was just a bit more attentive to my needs that night.

We had a lovely dinner with Jackie and Frank, then caught a cab back to the Algonquin, where my familial tribe of seniors had assembled for their own dinner at the Round Table. My Dad, 85, his wife, Sally, 90, my Dad’s sister Renie, a sparkling 80, her husband, Paul, and Sally’s son Richard, were all finishing their appetizers when we walked in. We joined them, and I it was truly wonderful to see everyone. But how did my tribe suddenly get so old?

At about 9:30, Jimmie looked over at me and made the “save me” sign with his eyes. We rose from the table and returned to our room. Time to rest up for Monday’s adventures.