As I walked to the beach, my self-imposed assignment tugged at my sleeve, like an insistent toddler the moment one takes a call. My creative muse gave a shudder as I stepped over a dead field mouse at the end of the tree-covered pathway leading from Aunt Deborah’s Lane to Forest Street.

It was my second walk in three days down to the tiny city beach where the road meets the sand. The first walk earlier in the week was with two dear high school and college friends; stepping onto the beach was an event, Holly reminded us as our feet plunged into the white hot sand of the beach, that we had not experienced together since….

“Do you remember the last time the three of us were at the beach together?”

“Of course! The day we skipped school and went to the beach! What beach was it?”

“Hampton Beach!” (Both of them responded immediately, the exact location fuzzy in my brain.)

“I think we rented a bus? Who organized the bus?”

“You did, Els!” (Really? Oh dear, this is getting embarrassing.)

“Who signed for the buses? I’m sure we would have had to have had an adult vouch for us.”

I imagined the two coaches filled with 100 hormonally charged and rowdy 17-year-olds, skin slick with baby oil routinely slathered onto ourselves, excited in our rebellion and proud of our organization of a “stealthy” escape from the confines of our boarding school, St. Paul’s, to Hampton Beach, an 1 hour and 15 minutes away from Concord, New Hampshire. Attempted Beach break out successful!

This week’s beach break out was smaller, but no less well organized. A series of emails had coordinated Holly’s and Nora’s trip to the cape efficiently, arriving with bags containing beer, wine and pie to fill our vacation larder. 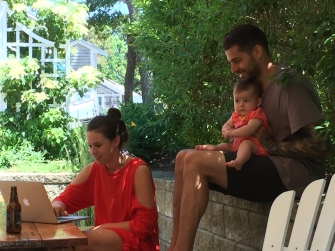 Chris and Whitney working on the patio.

Chris and Whitney were working on Chris’ resume on the patio when Holly and Nora pulled into the driveway, beeping their horn so loudly, that Chris commented,

What are they your sorority sisters or something?

After a lunch of chicken salad, we gathered our beach gear and began the short trek to the neighboring beach.

Our beach reunion this week was small but mighty. The three strong women who have come into maturity over the last 38 years were not so when we parted at SPS graduation, our virginal white dresses blowing in the Turkey Pond breeze over the meticulous green lawn by the  Chapel of St. Peter and St. Paul. We reunited at Princeton University in the fall, after 3 months of summer. Holly then took a gap year off between sophomore and junior years at Princeton, returning to join the class of 1983,a fact which she reminded us of this week. She’d spent the year in Sun Valley, Idaho, waitressing, tutoring French, and working for a small theatre company.

The three of us really didn’t reunite much at Princeton. There were 12 of us from the SPS class of 1978 who migrated to New Jersey, having found another ivy-encrusted idyll to inhabit. Idyll is too strong a word for my experience: I found Princeton socially stifling. I found a social circle of artistic souls, but at Princeton I didn’t develop the close bonds with faculty I had at SPS. I had had bi-weekly visits with my theatrical mentor, Bob Edgar at SPS, on Tuesday mornings prior to mandatory chapel, for what we called our “Tutorial.” There, in the bachelor tidiness of a faculty master’s lodging in Center Upper, the tutorial members, Will Schwalbe, Ed Tuck and I, drank coffee with “Edgar”, listened to classical music, learned how to discuss world events while giggling over Fred Rodgers’ recordings.

Some folks are fancy on the inside,

Others are fancy on the outside.

Your body’s fancy, and so is mine!

At 7:50 AM, we’d walk together to chapel on the brick pathway from Upper, the snow tamped down by the LL Bean-booted feet of so many before us, often between hip-high snowdrifts. While at Princeton, I never developed such close faculty mentorship as I had had with Edgar, but nevertheless found my theatrical tribe in the bowels of Theatre Intime, an octagonal brown-gray stone building in the center of campus, where we mounted dozens of serious plays, like The Devil’s Disciple, The Children’s Hour, The Mound Builders, and as well as the less serious Gilbert and Sullivan’s Patience.

Holly found her niche at the Triangle Club, Princeton’s musical theatre group, which celebrates their 125th anniversary this year, a reunion Holly says she may attend; she appeared in Godspell while a member in Triangle. Ironically, neither she nor I have set foot on the campus since we graduated in 1982/83. We discussed how we eschew large social gatherings; for me, sober for 31 years, I’m allergic to large gatherings of people where alcohol is the bonding element. Now I’m so curious as to what caused her to take the gap year while at Princeton.

Nora continued to row crew all four years at Princeton, finding her home there. We had rowed together at SPS, but it had never occurred to me to try out for the crew at Princeton. I think I was destined to spend my free moments in darkened theatres. We laughed about the fact that Holly and I were both so involved in the theatre at Princeton, but had never crossed paths because I had selected the “serious” theatre and Holly, the “social.” When it comes down to it, it appears that I’d selected the “off-Broadway” venue, and Holly, the “Broadway.” Triangle performs student-written material, directed and choreographed by professionals. It is frequently satiric, and usually polished; their strong alumni support allows them to take the shows on tour every February.

Back to the assignment, tug, tug, tug, as the winsome roadside daisies wiggle. 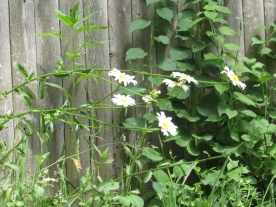 At the start of our reunion, I gave us the assignment to write about the day, offering to publish their essays on my blog. As though there needed to be a structure, literary proof of our encounter. I thought it would be fun to see how we each experienced the day; Holly is a beautiful writer, as is Nora, who denies her writerly acumen vehemently. In truth, Nora is the glue that bonds all of us in our class at SPS. An email from Nora can and recently did cause the spontaneous reunion of fifteen Paulies who live in L.A., after 38 years of isolationism. She thrives on maintaining the connections of her classmates, and goes to New York to meet annually with some of the class’ stars: Lisa Hughes, the editor of The New Yorker, among other dazzling women from SPS who reside there. Nora’s roots went deep at SPS, as the daughter of one of our teachers at SPS, Mr. Tracy; the other day, in the blustery sun and wind of Forest Street Beach, I espied his passion, and fervor on my friend’s face as we discussed our families.

After SPS, and how comfortable I felt there, when I got to the larger university, I didn’t really feel like I fit in. I wasn’t a “preppy”, and didn’t feel comfortable with that group or many other groups.

I remember hearing that you weren’t having a good time there. I often thought about looking you up and having lunch or something.

I wish we had done that.

How lovely it would have been to re-connect with Holly and Nora more fully at Princeton. Maturity provides perspective and appreciation of value: I suppose I was still in the formative phase of making friends while at Princeton. I consider myself fortunate to have come away with a handful of very good friends from that time. But I am regretful about how much richer things might have been if I’d stayed more closely tethered to these two soul sisters.

Both Holly and Nora have led such interesting lives. For her graduate studies, Holly studied in Ireland, writing her thesis on Beckett and Yeats. Nora has raised two children with her husband Tim, Holly three with her husband John. We all have stable marriages, aging parents, all of the accoutrements of lives well lived. We have children roughly the same age; Monday we compared and contrasted their paths.

We had the benefit of having our son, Chris, handy for demonstration, along with his beautiful fiancée Whitney, and their 6-month-old daughter, Skylar. They joined us at the beach after Skylar’s nap. Holly slipped off into the dunes to talk with her daughter, Mia, by phone as planned. It was completely comfortable, like we had never left each others’ sides for 34 years.

Sorority Sisters? Soul Sisters? Yes, you could say that. I am proud to count these two women as sisters of any stripe! Stay tuned for their assignments soon!