The pilgrimage to Chatham is now routine. Virgin American non-stop flight from LAX to Boston, arriving for dinner with Jimmie’s nephew Liam and his partner, Elliott and their gorgeous husky, Rex. A restorative, jovial and buoyant evening with them in their Somerville Victorian, and then we’re off in the early morning for our drive to the Cape, beating most of Saturday’s Cape Crush.

Our Friday 5:30AM departure went like clockwork. I have this memory of family trips as a child. We didn’t fly. About once a month we piled into the family station wagon and drove five and a half hours from Greensburg, PA, to my mom’s parents’ home in Wilkes-Barre, PA. These departures were a sweaty ordeal: Dad, groaning and swearing, teeth-gritted, as he piled the suitcases into the “back back” of the wagon. As a parent now, I can only imagine what getting all three of us kids together entailed. Mornings like these were not my parents’ most shining moments. Mom was pretty intense, despite the chain-smoking, and Dad was fairly tightly wound as well. God preserve the child who half an hour into the trip piped up with “I have to go to the bathroom, Dad.”

I can get pretty pushy, bossy, type-A, OCD, stage manager-ish -choose your term – around trip organization. It begins with creating an OCD Itinerary listing what we will do every waking minute of the trip. The landing on Normandy couldn’t have been more detailed. Of course, I don’t know what we’ll be doing every waking minute, so I just make it up. More often then not, what’s on the page becomes the plan. Sort of like a tech schedule. You may be surprised to know that it took the longest time for me to incorporate my work skills into my home organization. I remember once when I was driving Chris to the sitter’s house before heading to work at the Pasadena Playhouse that I realized, “I can make a schedule of child care using my SM skills.” Bingo! I realize that sounds cretinous, but there you have. After that, juggling childcare, hockey, work and house life became pretty easy. It’s why I know Hillary will make a good president. Anyway, in making the Itinerary this time, I showed extreme restraint in just writing down “7 days in Chatham.” Who says you can’t teach an old dog?

After the itinerary, my bossiness bleeds into packing and even organizing other trip members. Worried that our son and his fiancée and baby and dog were flying from California to Boston then driving directly to the Cape, I texted him, suggesting they might want to stop overnight with Liam and Elliott before continuing on to the Cape. Immediately I received a terse:

Don’t tell us what to do, Mom.

This text had the instantaneous numbing effect of stopping all communication for several days. Along with the awesome skills listed above comes a fairly well developed sensitivity to criticism. It is one of our charms. When I finally got up the nerve to call him, he laughed and said he had been joking. Liar.

My husband has always said he made the best decision of his life to marry a stage manager. I’m rather pleased to have been the one he selected. Lord knows, with his experience in the theatre, he had a broad range to select from. Granted, back in the 50s-70s they were all men, and he was married at the time so wasn’t looking for a stage manager wife then.

I start bugging him about three days before a trip to make sure that we will be packed. He lays out his clothes on the bed the night before, and I fold them up. Kind of endearing and Nora-ish, in a Doll’s House sort of way. Why? Because I didn’t trust that he could go on tour for 6 weeks by himself and manage to pack his suitcase? Anyway, this has become our ritual. Earlier last night, I was admiring a robotic clothing folder ad on Facebook; for a mere $850.00 it folds clothes after you pin them up on some clips on the front of the machine. I was jonesing pretty badly for that RCF last night, but folded everything relatively well, then jammed it into the bags, guaranteeing an afternoon of ironing in my future.

Last time we made the trip, we were halfway to the airport in our Uber® SUV when I remembered I had forgotten all of our medications. I’m pretty sure that 1 week of our medications could cure disease in the Congo. The Uber® driver was accommodating- turned right around and headed back to the apartment. There were set up, and right on the kitchen counter where I’d left them. Because we had left an ungodly amount of time to get to the airport, we weren’t even late. In fact, I was feeling pretty smug about my planning skills until about an hour later when I checked my Uber® app and saw that the 1.5 trips to LAX had cost us a whopping $159.00. Lesson learned. Today, we took a cab, medicines in hand.

Traveling as you age arguably may become easier. You request a wheelchair at the airport and after that it’s smooth sailing. Jimmie even remained seated as he went through the checkpoint, after declaring his knee brace, hearing aids, corneal implants and bionic elbow. I padded into the machine in my bare feet and was promptly patted down by two very serious young TSA screeners – my left armpit was of particular interest for some reason.

As planned, our trip to Liam and Elliott’s was easy, as we glided into their driveway, and climbed the stairs to their beautiful home. Liam had finished school that day; a gift from an exuberant kindergarten child graced the countertop in their kitchen. 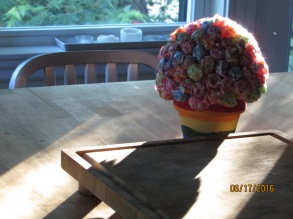 Dinner was take out Thai, and the talk turned, as it inevitably does with our hosts, to books and movies and life in general. It was a terrific conversation, one which I didn’t want to see end, but which ultimately did so we could get up the next morning for our drive to the Cape. That night afforded us a real treat, with a full thunder and lighting display directly outside the bedroom window. It doesn’t take much to please rain starved Californians. 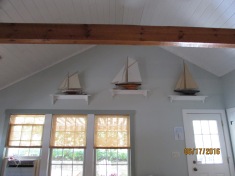 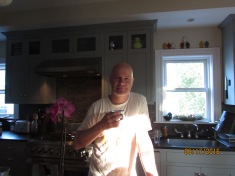