Our first house was a gray “Cape Cod” style house, 1100 sq. feet., on Riverton Avenue, just north of Burbank Blvd., you know the neighborhood, a block or so from the garish Circus Liquor store featured in films as where the desperate girl makes the phone call from the corner street payphone, clown leering over her head in the menacing endless night. 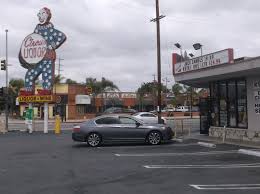 This stretch of Burbank was littered with car repair shops, handy we thought, as we were in the phase of our lives where we had car-me-downs from my Dad and then the beater car we bought from a used-car salesman named Duke, who sported a bandage on his nose, likely the product of a bar fight the night before we pulled into his lot to buy. Man, he saw us coming. We later found out that the car which had stickers on the back spelling out “black ‘n blue” had no motor mount, which explained why it made horrible noises on the freeway. We were probably lucky to live to see our first house.

Our realtor was Teri Ralston, an actress I had met while stage managing the Sondheim II APLA Benefit at the Variety Arts Theatre. I can still hear her belting out Rose’s Turn from Gypsy, and thinking of that performance, the hair inevitably rises on my neck. She sang the hell out of that song. Teri, in addition to acting in plays and TV, was at that time, supporting herself by finding people homes.

We loved the process of looking. It is, after all, the most optimistic of searches. Seeking the place which will keep you safe and cozy together, where you will perhaps raise children if so inclined, entertain friends, build your lives together in. I think we probably started looking at nicer homes in nicer neighborhoods, but faced with a certain economic reality, ended up in this desolate car-hospital-neighborhood. I think we looked at about five homes that first day before finding our first home.

Our little house was a gray bungalow, with wooden siding, a sturdy little square porch on the front, and a driveway that abutted another small house with a concrete block wall topped with cyclone fencing. We didn’t know it then, but that’s where Chris’ best friends, Ashley and Sean lived. We didn’t know it because we didn’t have a child then. It was just the two of us building our dream by acquiring our own little stake in it.

On the other side of the house was parked a large semi truck. We didn’t know it then, but that truck ended up being our breakfast view from the dining room table for the next ten years or so. We never met the owner, who was a little scary, but suspected that his bullet shot up into the air one New Year’s eve was the one that came down through our dining room window, becoming a harbinger of our relocation to our second home.

The back yard was a ridiculously large expanse of poured concrete, interspersed with two little corrals that looked like they once might have held a pony or two, but now held some mangy looking cacti. There was a two car garage out there, and a little garden shed. There was a large brick fireplace that graced the patio running along the back of the house, covered with a roof, with doors to the master bedroom and the guest bedroom for easy access.

Well, mangy as it was, we were in love. Arrangements were made, we entered escrow, still a mysterious process, but at that time, close to twenty five years ago, there was still an unfathomable amount of paperwork to sign before taking ownership, and we moved into our house exhilarated to begin our lives together there. Snug as two bugs in a…a rug was about all the furniture we had. We’d come out from New York almost a year and a half before, having spent the first nine months living at the Magic Hotel in Hollywood, and the next year at a furnished rental in the far West Valley, we had no furniture of our own.

We went to the Macy’s close out warehouse in Panorama City where we chose a navy blue sofa with a fold out bed for our guests who would be coming. We had a card table and a few directors’ chairs in our dining room, and that was about it. We acquired side tables from the Unfinished furniture store in North Hollywood, and I stained them (badly) in the garage in the back forty.

But when that couch was delivered, we were so happy. Shortly afterwards, my grandmother passed away, and we received a large amount of furniture from her home, much of which we still own in our third home. Eventually our furniture arrived from our apartment in New York, but it didn’t go far in filling the house. We were in the collecting phase of our lives at that time, and we enjoyed scouring antique stores for a bureau, a dining room table. Oh, and Ikea. We should have invested in Ikea stock at that time. We  practically lived there.

First homes are magical. They are your chance to break away stylistically from your parents’ tastes, to make your own mark in the decorating realm, which if you read the above paragraph, means you decorate in the style of your grandparents instead.

The happiest moment I think was the day we acquired our first washing machine and dryer, and didn’t have to lug our clothing to the Laundromat anymore, but sat on a sofa in the side porch and watched the clothes spin in the dryer while drinking a glass of ice tea.

The back yard was just the first of dozens of projects – as homeowners there is always something to do to improve. We ripped out the concrete and installed a carpet of beautiful green grass, bordered by curved beds of trees. The sprinkler system was activated from the back porch, where I could stand in my robe and watch the water flow. That was back when we had water in California. The current owners of that house have probably paved the lawn over again.

My happiest moments were kneeling in the dirt and planting annuals around the curved beds, roses in the section over by the garage. Taking all those steps to make our first house our first home.

So, on the occasion of your first housewarming, Leia and Fionn, we raise a glass to you and your new home, name TBD. Congratulations! We wish you much happiness and good health there.