One of the most enjoyable phases of putting Jimmie’s book together has been abusing my long friendship with my college pal, Bob Stern, now a graphic designer in New York City. We had the pleasure of seeing Bob and his partner Mitchell when we were in New York this summer, and there, in the dining room of the Yale Club, the years melted away and we reconnected after a mere whisper of time since graduating from college. 34 years gone in a flash! 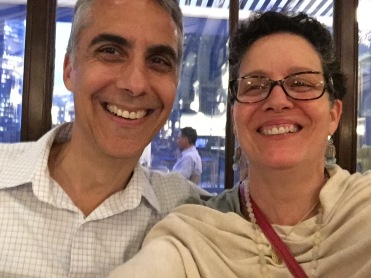 While we were in college, I used to visit Bob in the printmaking shop, and watched him as he designed, then laid the heavy block letters in the press,then printed out posters for our theatre shows and theatre department. The printmaking shop was housed in the same building where we had all our theatre classes; Bob and I also shared a love of theatre. We spent two summers running a theatre on the campus, traveled with about 10 of our college friends to Edinburgh, Scotland after graduating, under the guidance of our teacher and mentor, Carol MacVey. There we all re-mounted 5 productions before disbanding across the continent to broaden ourselves. I spent thirteen months living in Venice, Italy, several of them over the last summer while Bob visited, doing graduate studies from Yale, and  we cavorted among the canals with our misfit American and Australian expat friends. I wrote a series of posts, Letters from Venice,  three years ago about that time. It is easy to fall into silliness when I am with Bob.

When I got up the gumption to publish Jimmie’s book, I asked Bob if he’d consider designing the cover, and he graciously said yes. We had initial conversations about what it would entail. No slouch when I knew him in college, Bob now has an important job in New York, and is the father to a teen. Our initial book cover conversation was a Skype call at almost midnight his time. I had sent him the book a few days before, which he had read. After adjusting the lights so that we could see each other on our respective screens, we talked about the title, A View From The Wings, and how to convey the double meaning of the word wings, discussed in a previous post.

Bob came away from the Skype session with more than one interesting idea about the design of the book’s cover. He had an idea about using Jimmie’s silhouette as a window/curtain split through which one could also see him performing on stage. Trippy, right? I have a little trouble even now describing the concept, and at midnight, after strenuous days for both of us, Bob’s description wasn’t really sinking in. But I have enormous faith in his artistry, and after almost an hour of conversation, we ended the call.

Several weeks later, Bob apologized for his computer’s “crapping out.” We would have to wait to see the sketches of his idea, but in the mean time, could I find a simple full figure photo of Jimmie that we might use as the silhouette?

I don’t know about you, but my computer photo organization is in shambles. I have the photos in  my Iphotos folder, and in my photos folder, in a large box under my bureau, and in about 5 or 6 assorted old style family picture albums. I have another hard drive where I saved all the photos and I think obliterated all the dates associated with them in the process of saving them. I probably will need to spend about a month and hire a professional to figure out how to access and organize them. I suspect my inability to see and retrieve them all has more to do with the remaining size of my memory. How apt.

I mean my computer’s memory.

I went back and looked at all the photos of Jimmie I have in all my photo programs, and came across this photo of him backstage during the national tour of 12 Angry Men, wearing his natty white linen suit, in whichever city it was that I joined him in. I wasn’t sure that this photo would work for what Bob wanted, but it turned out it was exactly what he was looking for.

So weeks went by, and we had the man plumbing issues to contend with and then the teeth. We spent a few days in various ERs; I have great appreciation for the nursing staff and doctors who attend ERs. They are unfailingly kind and considerate. I have also observed that 56-year-olds don’t get in to be seen as quickly as 89-year-olds. So it was Wednesday morning at about 1:00AM, after the Tuesday tooth extraction, when out of the mists of my slumber, I heard someone calling. I don’t remember what I was dreaming about -actually think I was not dreaming, but suddenly awoke to see Jimmie standing next to the bed, and his pillow looked like something out of the horse-head-in-the-bed scene from The Godfather.

And off we went, this time to the County Medical/USC Hospital. Their ER made Good Samaritan’s ER look like a kindergarten. The size of the waiting room at County General was really imposing, but once again, we went to the head of the line. (Yes, yes, I distinctly hear my privilege.) In we went, and for the next few hours we waited as they tried about three different techniques for staunching the bleeding from Jimmie’s gums.

We spend a lot of time these days seeking medical care, but it’s time we get to spend together, and for that, however unfortunate the circumstances, I am grateful. We took turns sitting on the bed and the plastic chair in the ER bay#3 and took turns napping. It was during those hellish ER limbo hours between 4:30AM and Jimmie’s 9:00AM discharge that Bob’s email arrived with ten sketches of the book cover. 10! We looked at Bob’s creative ideas, any one of which would have worked just fine. I can’t tell you how much their arrival buoyed our spirits.

We are in re-cover-y. Thanks to Bob and the kindness of local ERs.