It’s been a rough week. Sometimes biology, anatomy, aging and the logistics of bodily fluids management conspire to create hellish circumstances. And so it’s been this week for my first husband and me. Before you put me or him on the pyre for sacrilege, let me assure you that this term has been vetted as completely ironic by the two people it most directly concerns. In fact, when we latched onto it sometime in the course of our dinner last night, it took us both several minutes to recover from the giggles. In the furtherance of medical clowning research, I promise to persist in using it at every appropriate opportunity.

We got really carried away. By now, the only thing distracting us from our ghoulish game was the not-distant-enough and relentless sound of a building’s fire alarm going off. I know it well, because we have the same sound in one of our theatres at work, and when I hear it, I suffer the same heart-clenching panic as the sophomore stage managers who’ve had to evacuate the house because of overzealous haze usage. I walked over to the patio, slid the door open, and looked over the balcony, to find the front steps of the Ralph’s market populated with onlookers and the sound blaring across the street to the balcony. And soon, sure enough, in came the firetrucks. 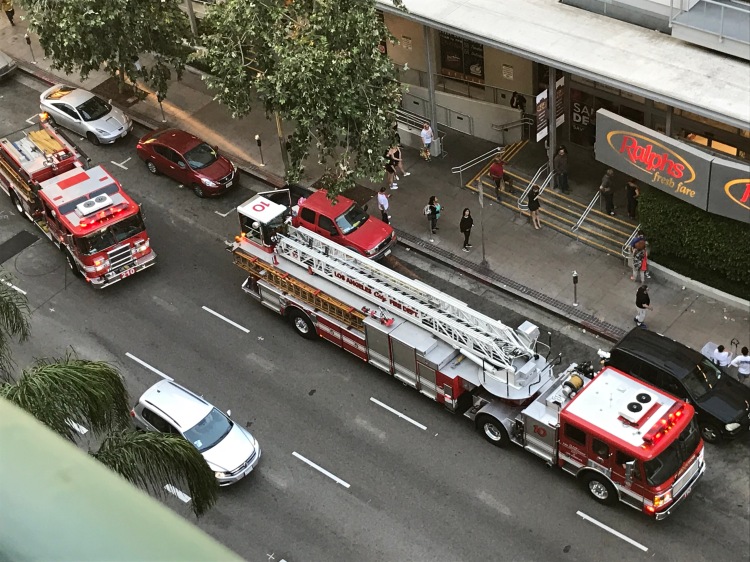 So we did what any self-respecting hearing impaired couple would do. We chose to have our dessert pudding on the patio overlooking the event. Yes, we rubbernecked with the best of them. In fact, we decided to continue our game playing with a good old-fashioned game of outdoor Scrabble®. Meanwhile, the poor onlookers waited on the steps of the store with amazing patience. I imagined 25 carts half-filled with the makings for dinner, ice cream puddling under the carts eventually because they were there for the longest time. And on and on and on it went.

On our side, things were going rather well on the Scrabble® front. I drew the lowest tile and started off with a few zingers, zit for 24 points followed immediately by buxom for 32 points. I was feeling pretty cocky, until things started to go downhill for me.

Eventually, I recovered, and took the game by a score of 240 to 182, after donating my U tile to Jimmie because I hadn’t seen the Q appear yet. He finished with Quo. (Yes, we play that way).

Anyway, all of these ghoulish games keep us amused and on track even when other things conspire to derail us.