I have on my dresser a battered green leather jewelry box. It is filled with some very old jewelry, as well as with the many beautiful gifts that my husband has given to me over the past thirty years. 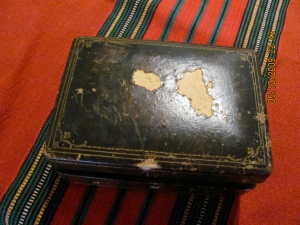 If you were to see the box, you would ask yourself – Why has no one replaced this battered old thing? Originally a deep hunter green leather it sports an elaborate but delicate tooled gold border around the top and sides of the box. Once it was lockable; the keyhole well worn on the front of the box. Now it doesn’t even close, due to its largess of riches. Inside, there is a green silk lining and a wooden inset which fits perfectly inside and has a long horizontal ring tray and two square receptacles which hold a collection of jewelry. Two square velvet pillows crimped around the edges provide real estate for broaches to be pinned on them.

The most notable thing about its disrepair, however, is the top of the box, which sports two, continent-shaped holes in the green leather. These holes, revealing the buff colored cardboard under the leather, the left the shape of Australia, the right the shape of Africa, with a bite out of the horn. Around these continents in the remaining sea of green are a series of systematic scratches in the leather.

These scratches denote hours upon hours of adolescent phone calls from my parents’ bedroom in my childhood house in Greensburg, Pennsylvania. We had two telephones in our modest colonial house: one black rotary dial phone which rested on the hefty wooden desk in the corner of the den, and one princess phone on the bedside table of our parent’s upstairs bedroom. Here is where I would take my phone calls, bent at the waist, my elbows resting on my mother’s bureau, as I chatted idly with my girl friends, while digging industriously into the top of the leather jewelry box with an open safety pin taken from the dish on the top of the bureau.

Who can say why a normally responsible eleven or twelve-year-old girl would consciously destroy her mother’s jewelry box? As I recall, I was generally not very nice to my mother at that time – surly would describe my attitude in general, but I don’t think it was anger at my mother that drove me to tattoo the top of her jewelry box.

Things were getting rocky between my parents around then, and perhaps I went into their bedroom to take the calls because I thought I would find out why – frequently I would sneak into the room when I knew one of my brothers was on the phone with a girl; breathlessly, I would listen as they cooed at each other, titillated by the endless expressions of love between them and hungry to experience whatever that special bond between boys and girls was. I would giggle with my friends Lisa and Pixie on the phone and spend long moments discussing the perceived wrongs that one of us had experienced in school that day. There was something comforting about digging away at the box – probably if I were an adolescent today, I would be digging away at my own arm – but then, there was some satisfaction in knowing that my mother would later return to her jewelry box and experience irritation that someone had mauled its delicate lid. What is so strange now in retrospect is that she never mentioned it to any of us – of course she knew that it was one of the children doing it – why did she never inquire?

All I know is that now I have the same jewelry box on my dresser – it is one of my favorite possessions. It’s beauty is scarred, like the childhood memories of my parents’ marriage. Its delicate cargo from the generation of my mother and my grandmother – the garnet heart on the gold chain with garnets evenly spaced up the chain – from a watch fob belonging to her father, which she thoughtfully made into a necklace for me because the garnet was my birthstone; my high school ring nestling in the horizontal tray in the back, along with some very old engraved wedding rings belonging to my grandmother’s parents; the blue enameled butterfly pin from my father’s mother which I still wear on spring days when I am buoyed by the expectations of summer; the tarnished silver thistle pin worn on my tartan elementary school uniform; the pink pearl necklace and drop earrings given to me by my husband on our 15th anniversary in a Pasadena eatery. So many treasures not the least of which are the memories of those hours spent idly marring the top of the box.