As Jimmie and I continue on the path to getting his book published in time for his 90th birthday – imagine a birthday party/publishing event on or around December 1, 2016 (evite to follow!), I’ve begun to actively source the process of self-publishing, finding many helpful blogs along the way. I’ve downloaded checklists of steps needed to self-publish by people who have books on best seller lists. The checklists are predictably overwhelming – one had one of ten or so items which was “Come up with 100 ways to market your book” which swelled the simple one page checklist to soul-crushing magnitude. And yet, we soldier on.

Last weekend, I began formatting the book with a template I downloaded from Lulu.com, and it suddenly became fun to see the book taking shape through the easy 6×9 style template. As I taught myself how to use the various style formatting for chapter headings and the body of the text, I flourished, reveling in creating chapter headings which didn’t yet exist, except as indicated in the manuscript by asterisks between sections. My favorite was “Chapter 11: I’ll never work again”, which happened to coincide with a period of Jimmie’s life where it appeared that work was drying up. The glorious part of this process is that Jimmie has had such a rich and successful life as an actor, spanning close to 70 years. Performing in over 26 shows on Broadway and close to 50 off-Broadway, he’s worked with the Lionesses and Lions of the American Theatre, and film and TV.

When Jimmie wrote the bulk of his memoir, it was in the mid 1990s, shortly after we had adopted our son; he was in his mid to late 60s at the time. The catalyst was Chris; as I mentioned before, the impetus to leave Chris with a record of his father’s life, but Jimmie found the process of writing rejuvenating. Writing is therapeutic, right? He eagerly embraced the work of recalling and ordering the events of his life, and countless filled pages of yellow-lined notebook spooled from his pen. It was a happy and productive time and when he finished it, he shared it eagerly with his closest friends. The number of friends who read the previously spiral-bound copy of the manuscript likely killed the sales impact of the book; I recognize the need to come up with 99 other ways of marketing the book. But that aside, Jimmie’s return to finishing the book by including events from the last 10-15 years, has been a different and more challenging process.

For one thing, Jimmie is 89. The physical impact of arthritis in his fingers has made the process of recording his writing arduous and discouraging. Other influences like the frequency for men his age to make trips to “see a man about a pair of ski-bindings,” as my father recently quipped, takes time out of his day, and creates both mental and physical interruptions to the writing. We have faced a recent and radical weight loss for him, that we began to take note of in May.

We’ve begun the formal investigation into these health issues. As one ages, the trips to the doctors increase in logarithmic proportion to those made earlier in one’s life. The impact of these trips on one’s spirit and body is profound. Getting into the car, walking down the long medical building hallways, getting undressed then redressed after the exams – all of these things take a chunk out of your soul and leave you enervated. Writing is probably certainly not the first thing on Jimmie’s mind. 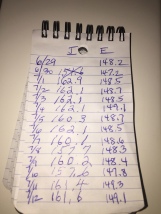 We’ve been tallying our weights. Ironically, I’m in the 8th or 9th week of a diet. I desperately try to lose weight that Jimmie is urgently working to gain. Our daily log looks like one of our scrabble score sheets. It’s hard to see who’s winning.

The recent tests intensify my focus on editing Jimmie’s memoir into shape to be published by fall. I spent this weekend editing the manuscript and urging him to begin re-reading it saying to him, “You tend to use a lot of paired adjectives to describe people. I’d encourage you to limit yourself to one whenever possible, and to dig deep for the most accurate, least flattering descriptor you can use. In addition, you should  eliminate the passive voice as much as possible in the manuscript.”

Jimmie looked balefully up at me from his Sunday NY Times crossword puzzle as though I had taken his bowl of ice cream away.

“I am being specific because this book is amazing and I want it to be as great as I know it can be. You’re hearing the negative in my comments, but  I really care about getting this done by your birthday.” What I don’t say is that the tests have spurred my focus on the book and the opportunity to work closely with Jimmie on something that might take both of our minds off his changing health. It goes unsaid, but is tangible.

Health issues that people face in their 80s can be debilitating. Where my focus on the book has become laser-like, Jimmie’s focus is on battling gastric distress, the increased frequency of labored bathroom visits, the pain in his knees and feet. When I come home from work and ask if he’s worked on the book, he feels ashamed at not having done more, but explains that he’s gotten tired from writing. It is hard to not judge because I have no frame of reference for his discomfort.

That’s the thing that’s  unnerving about aging: the fact that you really can’t relate to it until it happens to you. It struck home at the Cape, when, walking on the beach with our nephew Liam, as we approached the beach breakwaters, rather than scampering over them as I might have done even just three years ago, I found myself assessing the best approach so that I didn’t strain myself climbing over, or lose my balance. Aging is a bit like that – slowing down to accommodate things that didn’t phase you at 25 and which have now become hurdles at 56.

A 56-year-old writer with facility on a computer equates to the 25-year-old scampering over the breakwater. I want to assist Jimmie over the breakwaters of completing this book at his own pace, so that he is secure and relaxed and enjoys the process. So that the journey is as important as the destination. 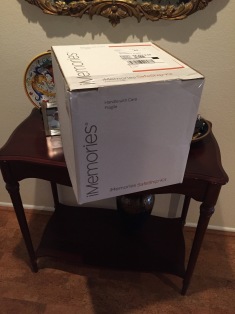 We will get as far as we can on this book project in the time we have. The distractions are part of the journey. They are part of our story. Like the family movies I sent this week to be digitized,  there will be good memories and maybe some not so good memories in that box, as there are in life. But we will be grateful to have all of them. The most important thing is to be present and conscious of making memories while we can.