The families and friends are gathering by the lake for the upcoming nuptuals like a flock of intrepid Canadian geese, mimicking the flock of a dozen or so near our back steps. Only much less pesky. First to arrive after Jimmie and me on Monday were the bridal party, Justin and Sammy. Justin and Chris were best friends throughout their teen years; their adventures together over the years could fill another series of notes. To see them together as men is a beautiful sight. You can see the evidence of their growing up in the gray hairs on my head, faint but persistent, like the stories they continue to regale me with like I wasn’t there.

Mom remember the time that we bought a utility cart?

…and I came home from work to find them careening through the neighborhood on it (it had no brakes). Before it was banished from our lives later that afternoon, it had made a memorial divot in the garage wall and had knocked the left pillar of our front gate a bit askew so that the gate never closed again and we had to move to escape it’s leering tilt.

But I digress, and after all, they are now men of the world and both moving in more positive directions, now with brakes and steering that works.

Sammy and Whitney grew up together, too, and their ease together is evident. We were well-disposed to loving Sammy because she is a fellow thespian. Whitney had assigned me one task, which was to pick up the wedding cake and get it to the reception, and when I expressed the least bit of hesitation, envisioning myself in the rose-beaded Mother Of the Groom (MOG) dress, balancing the 2′ tall tiered cake on my lap on the gondola ride to the top of the mountain, Sammy immediately volunteered to take over the task. I am forever grateful to her for that. That’s how we theatre people roll. No task too perilous to put on the show. And now, with the luxury of hindsight,  I’m happy to say that between the five of us, the cake got up the mountain in one piece…

Family and friends from back east have arrived, Bob, of book cover fame (A View from the Wings), and his family all the way from New York; my fabulous Aunt Irene and her husband Paul all the way from Florida. Whitney’s Dad, Dan, and family friend, Steve arrived from Washington. The energies people have spent to get here is so moving and so telling of their love of both families and of Chris and Whitney.  Wednesday evening we hit the Base Camp for pizza and salads, sprawled like pashas on their sofas in a back corner of the restaurant, catching a glimpse of the easy camaraderie of the Tahoe community; while there, Chris and Whitney greeted other locals warmly. They have made a home for themselves here in Tahoe. It’s easy to see why.

Thursday, several of us gathered for a pancake breakfast then took a stroll together through Kahle Meadows.

Paul, Renie, Mitchell, Bob and Jimmie at the trail head…. 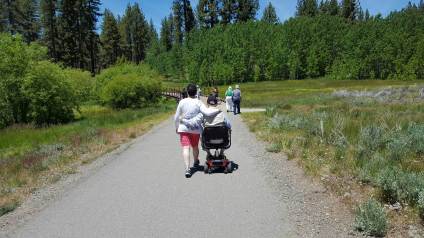 Els and Jimmie strolling along.

Renie and Paul, having driven all the way from Florida over anywhere between four and seven days (depending on who you spoke with), were giddy and happy to stretch their legs in the meadow. Back at the cabin, we met the next wave of arrivals, many of Whitney’s college friends and also several childhood friends from Washington. Jimmie, awaking from his nap, thought that our beach had been invaded, until he realized the wedding party was growing.

My brother Don and his wife Terry arrived. Our father and wife were not so lucky, having their itinerary interrupted in Denver, when the pilot and crew walked off the plane leaving them to find alternate travel, first to SF, then to Reno, their arrival being delayed by most of a day. But they made it safely as well, I’m happy to report.

One of the first things that happened to Don was a belligerently protective mother crow in a bush outside the hotel’s office flew at his head and began batting him with her wings. Don’s account of this event, his hands fluttering around his head, while giggling was hysterical. Here’s a news flash – the Collins family likes to giggle and laugh. At dinner later, when he told us that he’d been attacked a second time, Jimmie’s niece Martha told us that she’d seen a nature special that said crows have extremely well-honed facial recognition for people they don’t like. That set us off again.

Last night, the young folks had a BBQ at the house where some of them are staying, and the older crowd gathered at lake level at Riva Grill for a lovely outdoor dinner on the deck. 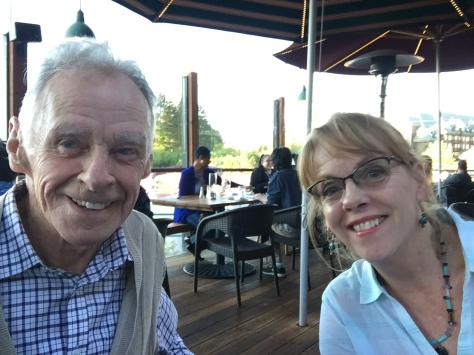 Life is so good. Tonight is the rehearsal dinner – the rehearsal went well today and we are ready for tomorrow! Raise a glass to the soon-to-be-newlyweds! 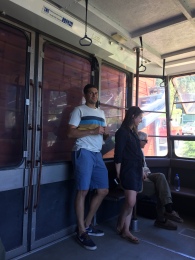