For those of you who live in Southern California, or anywhere on the west coast, actually, these past few days have been stultifyingly hot and uncomfortably reminiscent of my youth in Pennsylvania- so humid that when you walk outside you feel like someone just wrapped a hot towel over your entire body. I stepped outside of one of the SDA buildings the other day to go explore the new University Village campus at USC, and felt instantly beleaguered.

So, here’s my recipe for relief. I think it may be from my stepmother Joan’s kitchen, but honestly I don’t remember; I just know it’s delicious and very satisfying in these August
“Trump’s-on-holiday-and-we-hope-the-White-House-AC-techs-aren’t-Russian-agents” days. So here’s the recipe I promised my friend Allyzon from YAS DTLA.

Chill and serve in chilled bowls.

I’d been fantasizing about the gazpacho for about two weeks, not pulling down the wooden recipe box from the top shelf of the kitchen cabinet until yesterday when my darling husband had a tooth extracted. This is a horrible episode for anyone, but a trigger event for an actor. We are now on a self-imposed social exile for the next however-many-weeks until cosmetic dentistry is possible. And I completely get it. I thanked him last night as we sat down to sip our soup, for sacrificing a tooth so that I could have my gazpacho. That’s the kind of guy he is – completely selfless and eternally dedicated to pleasing me. You should all be so lucky to be married to such a person.

The other major event yesterday was the opening of the Trader Joe’s in the University Village at USC. The Trader Joe’s opened at 8AM, and I was there by 10:05AM, Jimmie still chomping on the gauze post-extraction in the parking structure below the store. Judging from the enthusiastic responses to our new acquisition at USC, Trader Joe’s will be the next best thing to… well…Trader Joe’s. I am overly zealous in my embrace of the company. I’ve been talking about it for weeks – heck, for years, since we learned of its promise in the planning of the University Village project.  I’d received a postcard earlier in the week announcing the opening and promising me a free shopping bag and entry in a sweepstakes for $50. worth of groceries. I thrust it into the hand of the cashier as I checked out my basket yesterday.

Do you want a free shopping bag?

Two days earlier, I’d visited the Mini-Target next door, first peering into the TJ’s window like a divorcée at Henri Bendel’s. The shelves were fully stocked, and the staff was moving through putting the finishing touches on the displays, their Hawaiian shirts crisp, Trojan-themed colors bright. On Monday morning, when I got there, there were surprisingly few patrons in the store, and the shelves were amply stocked. I know that this condition is unlikely last.

Jimmie has a good sense of humor about his episode this week. He reminded me about the early 1970s when he had auditioned for John Boorman’s film, Deliverance and was asked if any of his teeth were removable. Wistfully, he said

I might’ve gotten that part now…. 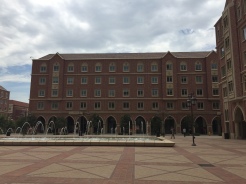 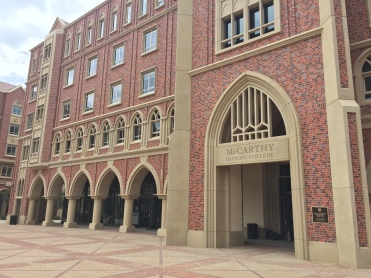