In the weeks leading up to the anniversary of Princess Diana’s death, I’m frustrated by the tributes and accolades, not because she doesn’t deserve them, but because her passing eclipsed the death of my own mother one day earlier on August 30, 1997.

I’ve been thinking a lot about Shirley’s legacy. I remember the immediate aftermath of her death, the aching newness of the grief, as I stood on the front porch, watching the understated white undertaker’s van drive away, her emaciated extinguished body inside. Jimmie and I retired to the couch, hugging and crying with loss and yes, relief after a brief fifty days of hospice, quietly, so as to not awaken our eight-year-old son. At a decent hour, we called our friend Jason, and the four of us went out to breakfast at a Studio City deli, numb to the bustle of life around us.

I felt bewildered when she died. I’d known it was coming of course, as she had declined precipitously over the past two months from lung cancer. But I was surprised at how it felt to lose a mother. One of the hospice nurses had given me a little blue pamphlet detailing the signs of death, the stages of grief, what we might expect when losing a loved one. I’d sustained other serious losses in my life, the loss of my aunt, my grandparents, my stepmother. But the loss of a parent, especially the first parent, was distinctly wrenching. I remember thinking death isn’t something we want to linger over, but inevitable and universal in ways that nothing else is. Shouldn’t we know how to talk to each other about death and its aftermath?

I’ve been thinking about my mom, about societal changes since she died – the “Death with Dignity” movement. Hers was not a death with dignity. Lung cancer from a lifetime of smoking Pall Mall’s, and the resulting ravages. When she was still more or less cogent, before her big brain succumbed to the cancer’s tendrils, she sat in her winged back chair in the guest bedroom, and asked me to help her end her life. But there was no guide book to know how to help her. And I failed to recognize the opportunity to do so when the hospice nurse administered the first dose of morphine which lowered her into a coma. Instead of being relieved for her, I objected to the drug’s strength and effect on her. Selfishly, I wasn’t ready to lose my mother.

As I write this, I regret that twenty years ago, we didn’t all have iphones in our pockets; I don’t have photos readily accessible to see her face when I want to. Fortunately I have some scanned photos of happier times.

Twenty years later, I’ve put aside the painful immediate legacy and can examine the more lasting one – how she shaped us, her children – her character traits and the inherited values that we hold dear. She was more resilient than anyone I have ever known. A writer, she was a late-blooming journalist who, in the wreckage of her twenty-year marriage to my father, rose Phoenix-like to be accepted into Columbia’s School of Journalism at the age of forty-nine. I inherited her love of storytelling, of finding the common humanity squirreled away in our quotidian lives. She was curious about people whose views differed from her own and wrote about them with kindness, so that the reader felt as though they were sitting talking to the subjects of her articles.

She was generous. For five years, from just after college until Jimmie got his TV series, she sent me $100 checks each month, folded into newsy letters detailing her work, visits from her parents, books she was reading, planning visits to see us. I remember at the time being defensive and a little miffed, thinking to myself, “I’m a grown woman, Mom; we don’t need the money.” Besides, I knew she didn’t have it to spare. She worked hard to support herself, but continued to send the letters and the checks as loving outreach. How I looked forward to her letters arriving, with her spidery cursive writing on the envelopes and inside, which I’d scrutinized to read.

She visited us often, stayed in our guest bedroom; she enjoyed the dry California sunshine before heading back to Pennsylvania’s turgid humidity.

She was vain and yet modest. After she died, my brothers and I went back to clean out her townhouse, where she had four closets full of clothes that she rotated by season. She dressed with style, and yet deflected compliments with the same practiced grace of her backhand shots on the tennis court.

I definitely got my self-deprecation from Shirley.

Last week, as I was thinking about Mom, I reached out to my brothers to see how they remembered her now–how she had impacted their lives. Their answers were radically different, underscoring the range with which siblings can experience their parents.

Later in an email entitled “I missed the assignment,” he reminded me of several Momisms:

Which reminded me of my favorite:

My brother Larry sort of dodged the assignment. His answer was hardened by distance and his inherent aversion to sentimentality as well as what he described as major difference in our childhood experiences.

We continued talking, and I asked him how his work was going. He’s a commercial fisherman in San Francisco, responsible for a successful co-op of boats who supply San Francisco with Dungeness crab in the winter, and California King Salmon in the summer and many other species in between.  Our conversations are frequently about the quantities and types of fish coming across his very busy winch.

Friday he’d unloaded 50,000 pounds of Tuna, 68,000 pounds of squid. He said that someone had given him some Big Eye Ahi Tuna, a sixty-pound fish he’d shared with his boat hands and his Japanese next door neighbor. They’d unloaded 20,000 pounds of Opah, which I asked about, never having heard of them.

They are 125 pounds each, shaped like an upright silver dollar times 1,000, with giant red lips and giant red fins.

After hanging up, I went right to the internet to find a picture. Incredible!

He’d told me about the golf-ball sized divots that they frequently find on their bodies. These odd, perfectly round holes are caused by Cookie Cutter Sharks, small one-foot long sharks almost like eels. He told me how they graded the Opahs as they were unloaded by cutting a piece out of the tail to look at the meat. 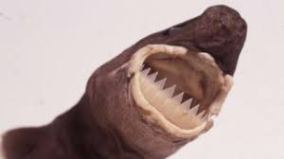 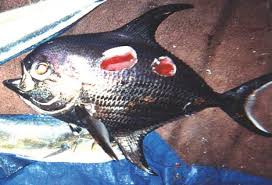 As we talked, I realized that aside from Shirley’s work ethic, Larry had inherited her enthusiasm for story telling, and actively uses it in his avocation as a fisherman and a fish seller and occasional fish educator to visiting schoolchildren. After his field research from thirty plus years as a fisherman, he now enjoys telling us landlubbers stories about a place few of us have the opportunity to explore, the sea.

He has become the go-to source for news outlets in San Francisco when they need a story about the current fish scene. Shirley would have been so proud of him, and our brother Don, and I like to think, of me, as well as all of her grandchildren.

I think that’s the most poignant thing for me about losing Mom when I was thirty-eight. She never witnessed my evolution from theatre professional to college professor. It wasn’t anything I had planned, just as I’m sure my mom didn’t contemplate ending her life as a housewife to become a journalist.  Her resilience in the face of her changing circumstances and her realization that she’d found her life’s work out of necessity was exemplary for all of us.

I know I’m more than a little biased, but I’d say Shirley’s legacy holds up pretty well even when compared with Princess Diana’s.