This week, unfortunately, I stumbled across a recipe for scones in the New York Times. I don’t know how I could have gotten to the ripe old age of fifty-hand-over-mouth-mumble without knowing how ridiculously easy scones are to make. And now that I’ve lost the illusion of them as something only English people (who seem ever so much more clever than we) can whip up, Lord help me. And you, if you’ve clicked on the link above. Curse you, Susan Guerrero!

Today I made two batches, telling myself that I would share them with others; when Jimmie eschewed a hot fresh scone for a Thomas’ English Muffin this morning, I knew I was really in the danger zone.

And yet, that wasn’t the first good idea I had this week. Yesterday, at the end of the work week, Jimmie and I scootered over to the park for a half hour, happening upon a flash-mob of toddlers all under 3 playing with their parents in a postage stamp of green grass in the center of the park. It was adorable. A diverse group of parents, from the nearly neglectful rockers languishing on a bench as their tow-haired two-year-old dashed madly around the grass, to the maniacally kiss-crazy mom chasing behind her son chortling, “Good job, Joey!” every two seconds. It seemed to be the only thing she could come up with to say, but her adoring offspring suffered her kisses with a delighted smile, giggling into the falling tendrils of his mother’s hair. Meanwhile, his father stood nearby waiting for the two of them to notice he was there. A pair of doting grandparents sat on a bench reading, watching their late twenties daughter tossed a ball with her Boden-clad daughter, sparking the question, “Who wears a skirt to the park to play?” Such a mean-girls thought seemed inhospitable in the midst of “the children’s hour.”

There must have been 13 under-threes in the group. I wondered whether they were a club. They all seemed to know each other, and there were companionable grownup chats happening around the perimeter of the grass at benches such as ours. It was only when I saw a caravan of strollers forming, winding away from us toward the playground area that I remembered seeing the film crew breaking down their setup as we’d entered the park. I noted that the yellow caution tape had been removed from the perimeter of the playground. So, yes, they did know each other because they all shared the same playground at the same time of day. Mystery solved.

Jimmie and I remained in companionable togetherness on our bench, chatting about an idea for a play I’d just had. I hasten to add that this idea comes from the same hare-brained place that the idea to make three batches of scones in as many days comes from, but here it is.

Spin-Cycle: The play takes place in two acts featuring the early morning denizens of a gym to the rumpled, linty late night hijinks of a laundromat. Producers, don’t despair! You could utilize the same cast members, because god knows the morning people make dirty clothes apace. Tag line: What goes around comes around.

Brilliant, right? No, Els, it is not.

These are the idle meanderings of someone whose brain is task-saturated. And that’s my home life. Last week, Jimmie and I careened from doctor’s office to doctor’s office to lab to X-Ray, in preparation for his procedure next Thursday, the same day Brett Kavanaugh most likely becomes the next member of the Supreme Court. Despite that inauspicious coincidence, I have no reason to believe our procedure won’t go well and Jimmie will thrive afterwards. But I’ve become dizzy with details for managing his pain and prep. Simple screwups like the fact that it turns out I’d been overdosing him with Motrin for several weeks.

And so, I’m baking. Never a good sign; since I do spend so much time “researching my first play” at the gym, baking is a self-sabotaging act of dietary regression, and I can see it’s resulting bulges through my sweaty togs. On the other hand, I rediscovered the fascination of cooking good food as well, when Jimmie’s great niece, Niki, came through last weekend, demonstrating the beauty of well-cooked greens and delicately grilled cumin-flavored potatoes with swordfish. 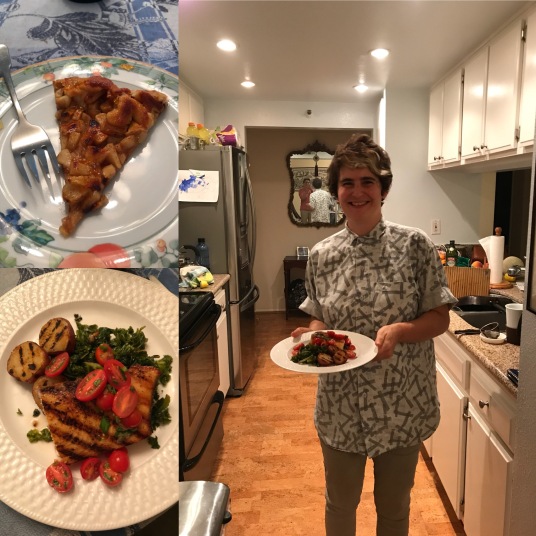 This morning I cut the beet greens off the beets I’d bought and made a lovely chopped beet and onion sauté to go with my brown rice and scrambled egg breakfast. Which I promptly followed with a maple walnut scone chaser. Slathered in Earth Balance…

So hit me up if you want a tin of scones or some good play ideas. I clearly have plenty of both.